Washington Wizards clipboard: Shoot the three or get the quick 2?

Breaking down one way the Wizards were able to get a quick two in a late-game situation.

Share All sharing options for: Washington Wizards clipboard: Shoot the three or get the quick 2?

At the end of close games, the losing team has a couple ways to quickly close the gap in points: they can shoot a three-pointer or try to get a quick two and foul. However, getting a quick two can be easier said than done. Let's take a look at how the Washington Wizards set up the Indiana Pacers' defense so they were forced to give up a layup in the closing moments of the game.

The Wizards, down by four, start the play with 21 seconds remaining and Jordan Crawford taking the ball out of bounds. Nene pops out to receive the pass and John Wall works up to the top of the key to start the offense. 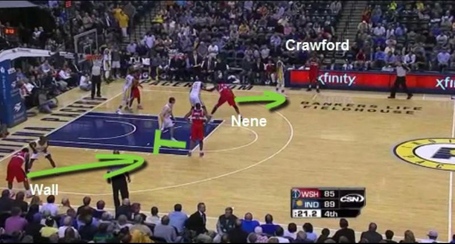 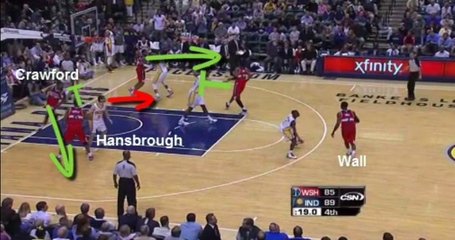 Because Hansbrough didn't provide any resistance on Crawford, Paul George is at a disadvantage as he works around the screen. The picture below shows the separation between Crawford and George as the pass is in the air. George will need to work hard to make up ground. 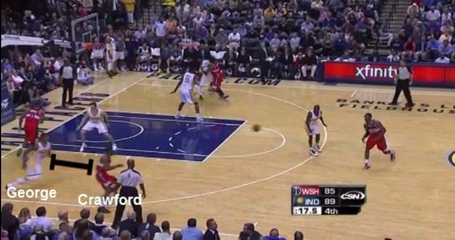 George closes in on Crawford, but Crawford uses George's momentum against him as he easily beats him off the dribble. On the other side of the floor, potential help defender Roy Hibbert is still occupied with that screen exchange. 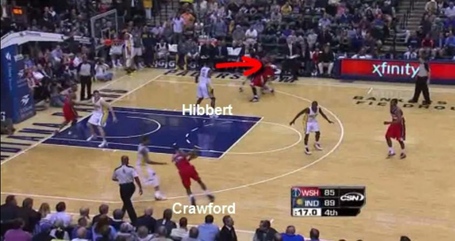 As Crawford makes his move to the basket, Hibbert and Hansbrough are way too late to react, and Crawford gets his quick two. As an added bonus, the basketball gods reward the Wizards for their well-run play and Crawford draws the foul. 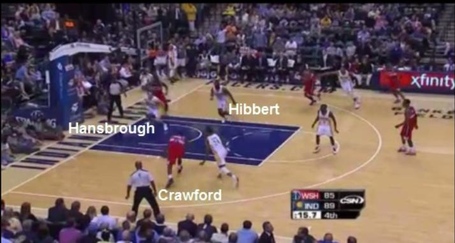 Here is the full play in action:

Even with limited perimeter threats, the Wizards forced the Pacers to defend potential three-point shooters on each side of the floor. By stretching the Pacers' defense and commanding the help defenders' attention, the Wizards were able to get a quick layup for Jordan Crawford. With Bradley Beal in town, plays like this one should be more successful because of the increased perimeter respect.