Is Bradley Beal a Future All-Star?

Share All sharing options for: Is Bradley Beal a Future All-Star?

Scouts have raved about Wizards rookie Bradley Beal, with a number of them calling Beal a future star. Drafted third overall in 2012, Beal is a relative rarity in that he's one of only a handful of shooting guards drafted in the first half of the lottery in the post-Jordan era.

With his above average athleticism, textbook shooting form and high character level, Beal is very unlikely to be a bust. For a Washington team that doesn't feature any natural scorers, though, simply not being a bad player won't be enough to justify using a high lottery pick on him. If the Wizards are going to compete for a championship in the John Wall era, a lot of things need to go right. Beal becoming a star has to be one of them.

College performance isn't the be-all, end-all when it comes to predicting how a player will develop, but they can be useful. Beal's college output was good, but how does he rate in comparison to some recent All-Star shooting guards? The answers after the jump.

Over the last 10 years, nine different shooting guards have played college basketball and made an all-star team. One of these players is Michael Jordan, but since he was almost 40 when he made the all star team and played college basketball more than a decade earlier than any of the other players being examined, I've omitted his information. That leaves us with eight pure shooting guards who have made all star teams and whose freshman years of college can be easily compared to Beal's: Allen Iverson, Brandon Roy, Dwyane Wade, Joe Johnson, Michael Redd, Ray Allen, Rip Hamilton and Vince Carter.

All statistics are per 36 minutes and taken from the players' freshman seasons. 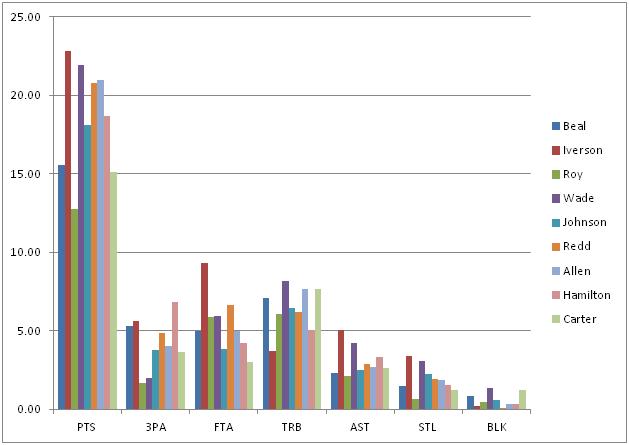 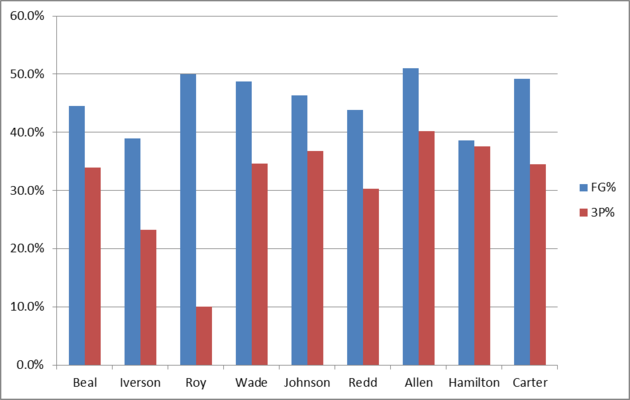 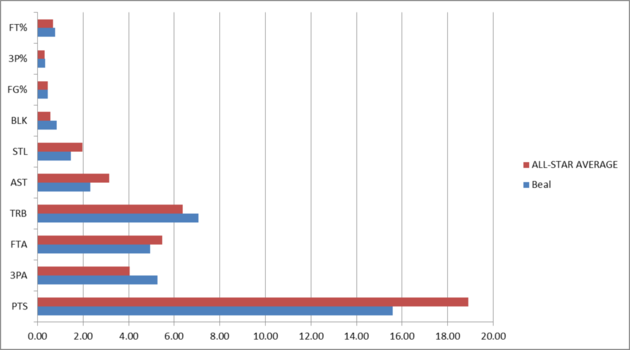 Beal's freshman season at Florida seems fairly middle of the road in comparison to the last decade's All-Star shooting guards. While Beal has been described as relatively unathletic in comparison to the protoypical star wing, he's actually a surprisingly good rebounder and shotblocker. Also, although he's technically below average in terms of drawing fouls, this is a bit misleading due to Iverson's ability to get to the line at will. Remove him from the sample and Beal's free throw attempts per 36 minutes are exactly the same as the All-Star freshman year average.

All-Star shooting guards need to be able to create offense, though, and that's where Beal runs into trouble. Keeping with the conventional wisdom about his offensive weaknesses, Beal's scoring rate is well below what an All-Star would be expected to produce in his freshman season. Only Roy, whose poor jumpshot caused him to struggle during his early college career, and Carter scored less than Beal. Moreover, Beal was relatively poor as a creator for his teammates, averaging almost a full assist per 36 minutes less than the average freshman future All-Star shooting guard.

While Beal seems well on his way to a future as a long-range marksman who can rebound like nobody's business, it's an open question as to whether or not he'll develop the shot creating ability to become the player the Wizards desperately need him to be. While an above average shooting guard would help the Wizards, it's hard to see the team being able to acquire enough additional firepower through free agency or a low lottery pick to compete with juggernauts like Miami or Los Angeles.

What do you think? Vote in our poll and explain away in the comments.