Much like Michael Jordan's tenure in D.C., this week's trip down memory lane at Bullets Forever has been one of emotional ups and downs. We all remember what it was like to hear that MJ was moving to an NBA front office, and no one remembers more fondly than Wizards' fans what it was like to feel the anticipation of the greatest player ever wanting to play for your team.

We've been reminded of all his great moments in DC, and we've even begrudgingly relived the worst. And at the end of the 2002-2003 season, Jordan's tenure as both a player and a front office executive came to an unceremonious end. He retired as a Wizard -- without making it to the offseason again -- and he was fired from the organization on May 7, 2003.

After he was gone, what did the Wizards have left?

But MJ's long-term impact on the team--less to do with tickets and more to do with personnel--is even more interesting. He was a fairly busy manager in Washington: he drafted seven players (hi Kwame!), signed and/or waived a dozen or more, and he made huge blockbuster trades -- most notably to send Juwan Howard packing to Dallas. With all of the roster changes he made during his tenure, I thought it fitting to see how MJ's roster moves impacted today's roster.

I compared the end-of-season roster in April 2003 to the start-of-year roster in October 2003 and assumed those were the last players that MJ brought on board. There were nine players that fit that description: Christian Laettner, Etan Thomas, Jahidi White, Jerry Stackhouse, Larry Hughes, Brendan Haywood, Jared Jeffries, Juan Dixon, and Kwame Brown. I traced all of these guys from October 2003 to see who on today's roster was acquired as a result of something Michael Jordan did, and here's what I found out:

There were four players that left as either free agents (restricted and unrestricted) or were traded and the acquired player was immediately waived: 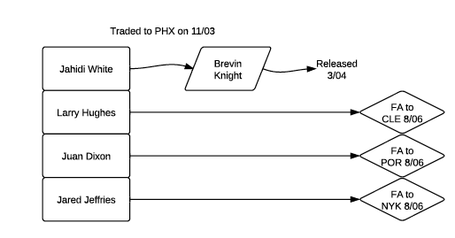 Nothing to see here. These guys opened up some cap space in 2006, but by then the Jamison-Arenas-Butler core was firmly in place.

Then there was another player that was bundled with a later-acquired free agent, a drafted player, and a pick whose identity was yet-to-be determined. Remember this one?

In a last-ditch effort to jumpstart the Jamison-Arenas-Butler core, Ernie Grunfeld traded away Ricky Rubio (I still cannot believe he dropped that far), Thomas, Pecherov and Songaila for Randy Foye and Mike Miller. Then we had gunsgate and fingagunzgate, and the franchise felt like it was spiraling out of control. Well, Miller and Foye probably felt like that, too, since they high-tailed it out of D.C. as Free Agents in July 2010 (aka, the Summer of LeBron). Again, the trail runs cold.

The last four players on the last MJ roster (Laettner, Stackhouse, Haywood, and Brown) left a bit more complicated of a path from 2003 to 2012. Lots of trades and lots of bundling turned these guys (and a handful of picks and free agents) into more trades and more bundling and ... well, I'll let you see for yourselves: 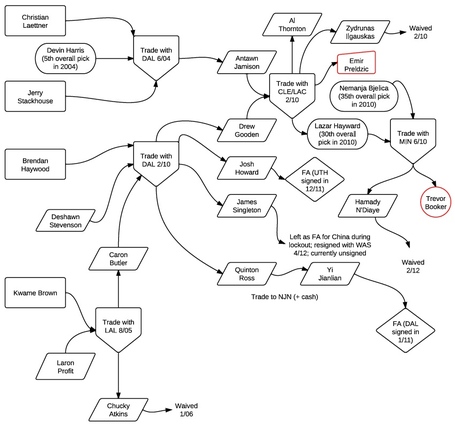 On draft night in 2004, the Wizards bundled the 5th pick in the draft (Devin Harris) with Stackhouse and Laettner for Jamison. In 2006, Kwame was sent packing for Caron Butler. Haywood, Stevenson, and Butler were traded in 2010 for a handful of guys that were flipped again (as eventually was Jamison) for some cap space, picks, and more trade fodder. Throw it all through the rinse cycle a couple more times, and all of that turns into Emir Preldzic and Trevor Booker. Preldzic probably won't ever come stateside, so he's mostly a trade throw-in for the future. James Singleton is also sort-of on the team (since he played after getting back from China last season), but as of today the roster has 14 players on it, and none of them are James Singleton. So he doesn't count. And then there's everyone's favorite hard-working small-but-strong off-the-bench power forward, Trevor Booker.

Congratulations, Trevor Booker. You are the one true heir of Gryffindor the Wizards-Jordan bloodline.

All roster moves and attendance rankings courtesy of Basketball-Reference.com.