John Wall is one of the most athletic point guards in the league, so why not put that ability to good use and let him rise above the defense for some alley oops? Let’s take a look at how the Wizards create space for John Wall's highlights.

The play below is a common occurrence across the league. John Wall passes to Jordan Crawford, who gets ready to run a pick-and-roll with Kevin Seraphin. The help defender (Marreese Speights, in this case) hustles over to provide help with the ball screen.

After seeing thousands of pick-and-rolls over the course of a season, those help defenders start anticipating the pick-and-roll and get ahead of themselves in trying to stop the ball handler. They may start running over to stop the play before the screener even gets there. Some offenses run pick-and-pops or slip screens to take advantage of an overaggressive defense. However, Wizards didn’t really have the players to run pick-and-pops or slip screens. Instead, the Wizards used John Wall and his athleticism to keep defenses honest. 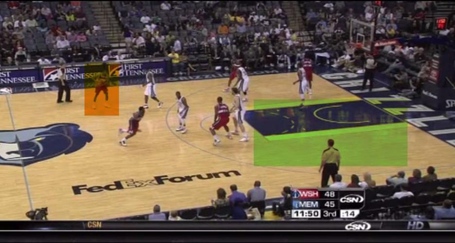 As the screener makes his move in the general direction of Crawford, his defender (Marc Gasol) assumes he’s going to set a ball screen. Thinking it's business as usual, he starts to wander toward the ball in anticipation of the pick-and-roll. 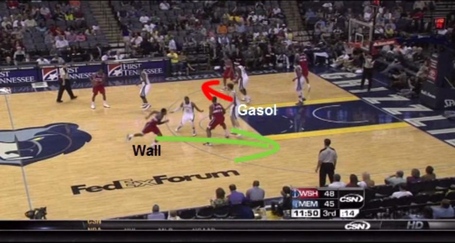 The poor positioning and lack of communication doom the defense here. Gasol is one person who could deny the pass, but he has moved himself out of position. Rudy Gay, on the baseline, didn't have to stay so close to his man or could have communicated with Gasol. Nevertheless, Wall is free to catch the lob. Some examples of the play are below, and each clip tells the same story.

This play is simply one way to catch a defense sleeping on the job, as even minimal communication between the screener’s man and other off-ball defenders could limit the Wizards' success. But, when defenses try to take shortcuts and get lazy in their communication, John Wall can take advantage with style.