Michael Jordan Week keeps chugging along, with today's feature a by-the-numbers look at his time in DC.

Michael Jordan is the single greatest player in the history of the NBA. Really, there's not a lot of debate here. You can make the case for Bill Russell, Kobe, Lebron, Hakeem, Magic, maybe even Shaq, but the arguments are always pretty flimsy when you take emotion out of them.

Statistics, and especially the advanced ones (win shares, adjusted plus minus, PER, etc.), support this. For the most part, people are pretty familiar with the stats when it comes to Jordan. 30+ points, a great field goal percentage, 6 rebounds, and maybe 5 assists was par for the course for the vast majority of Jordan's career.

After his second comeback, this time with the Washington Wizards, Jordan wasn't the same, though. In part due to rust but primarily a result of being almost 40 and fighting a losing battle with chronic knee problems, the Jordan that the Wizards got wasn't the one most people over 25 remember. While he wasn't as great as he'd been as a Bull, he also wasn't a complete bust as a Wizard.

To really understand Jordan's affect on the Wizards, it helps to be able to look at his pre- and post-Washington production. In order take into account his heavier minutes load with the Bulls, I'm only using per-36 minute statistics here, too. 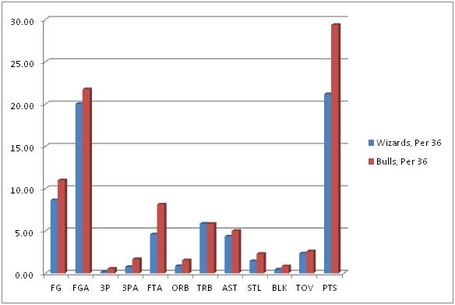 Right off the bat, the first thing that jumps out at any MJ fan is the drop in scoring. While 21.2 points per 36 minutes is nothing to sneeze at, it's a huge step down from the almost 30 he had averaged up to that point in his career. What might have been even more important at the time was the drop off in efficiency. Jordan continued to be able to create an enormous number of shots while rarely turning the ball over, his field goal percentage dropped from over 50 for his career to the low 40s, while his rate of free throws was cut in half. As a result, he went from being extremely efficient - think Dwyane Wade with fewer turnovers - to roughly as accurate with the ball as Jordan Crawford. As a result, his Win Shares Per 48 Minutes (a fairly common way of measuring a player's efficiency) dropped from his previously elite levels of roughly 2.5 - again, Dwyane Wade is a pretty good comparison here - to less than 1, which by definition made him a below average player, at least by this metric. While the rest of his game aged very well, Jordan's loss of efficiency was key to his inability to will the Wizards into the playoffs.

Things like win shares, true shooting percentage, effective field goal percentage, and other quantitative ways of looking at individual production by basketball players can be very valuable, but they have their flaws. One of these is that they don't take into account how much better a player makes his teammates. While Wizards-era Jordan was essentially limited to old man moves and pull up jumpers, he still drew an enormous amount of attention from defenses. His high basketball IQ and ability to find the open man without turning the ball over, two highly underrated aspects of his game all throughout his career, didn't deteriorate with age, and as a result, he managed to improve the offensive games of his teammates.

While some of it may have been tied to improvements on the part of Rip Hamilton and a career year from Chris Whitney, the Wizards' offensive rating improved from 100.6 the year before Jordan came to Washington to 104.8 in his first season. This was followed up by a slight decline to 103.0 in 2002-2003, his second and final season in Washington, although this could have been in part a result of replacing Hamilton's catch and shoot abilities - which meshed very well with Jordan's playmaking ability - with the slashing Jerry Stackhouse, as well as the departure of the sharpshooting Whitney.

Digging a bit deeper, there is even more evidence that Jordan's contribution to the team was more extensive than the box scores of the time would have you believe. While there aren't a lot of easy to find advanced statistics for the 2002 team, there's quite a bit of data available for 2003. That year, despite posting a 37 and 45 record and finishing the season with the NBA's 20th best record, the Wizards' most-used line up of Larry Hughes, Jerry Stackhouse, Jordan, Christian Laettner, and a young Brendan Haywood ranked 14th among the league's 29 teams' most-used lineups, indicating a comparatively weak bench but a solid core, despite a power forward who didn't play defense and a still-raw big man who at his best was only an average starting center. Despite excellent wing depth in the form of Stackhouse - then a big-time scorer who drew fouls by the bushel - and an improving Larry Hughes, Jordan still posted an adjusted plus/minus of +1.3 for his final season. In a vacuum this isn't particularly impressive, but considering the caliber of players who took the floor when he rested as well as the team's overall dearth of talent, it can be taken as a sign that Jordan was still a very good if not quite elite player. Jordan's Roland Rating, which is based on a player's on court/off court rating, of +3.8 that season also lead the Wizards, even though it was only good for 70th in the league. In short, he was still the best player on the team and did more to elevate the performance of his teammates than anyone else in a Wizards uniform that year.

At the risk of sacrificing some objectivity, too, it's worth it to compare Michael Jordan's performance in DC to that of other perimeter players who were active at the same age. While there are a handful of perimeter players who managed to stay active into their late 30s, most of them either become pure spot up shooters (Michael Finley, Reggie Miller to an extent) or else they drastically cut back on their minutes (John Stockton). Jordan was unique in that he not only was a focal point of his team's offense but also managed to play around 36 minutes a night for the Wizards, and yet he still managed to be as effective as any 38 year old guard in history with the possible exception of Stockton.

Looking back, it's easy to get caught up in all of the hype of the Michael Jordan era. Attendance, fan interest, and media coverage all spiked, but the common narrative is that Jordan came back and embarrassed himself. While it's fair to call him a shell of his former self, his two year run in a Wizards uniform was hardly embarrassing, and considering his age, it was actually very good. Sure, the shooting efficiency and volume fell, but the rest of his game was still somewhere between solid and good, and his ability to draw defenders' attention and make the right pass did wonders for an offense that would have otherwise been extremely poor.