During the late-season winning streak, the Wizards’ knocked off the Bulls as C.J. Watson's missed three point attempt sealed the game.

Let’s have a look at the Wizards' defense on the play that decided the game.

The play starts with Kyle Korver running to the ball off of staggered screens from C.J. Watson and Joakim Noah. Since the Bulls were down by three, Korver was obviously going to be a main option on the play. 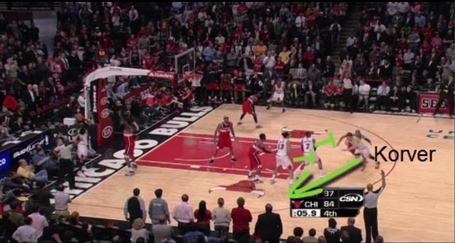 Of course, the Wizards are well aware of this, and both John Wall and James Singleton make a move to stop Korver from getting the ball. It’s not necessary to have two players denying Korver, and this miscommunication opens up opportunities elsewhere. 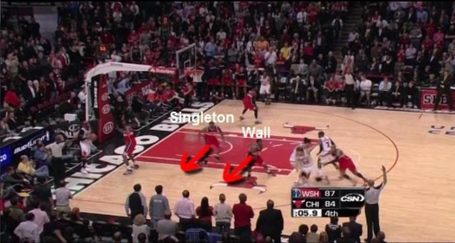 After Watson sets his screen, he fades to the top of the key. Since both Wall and Singleton are occupied with Korver, nobody is left to stop Watson from getting the ball. 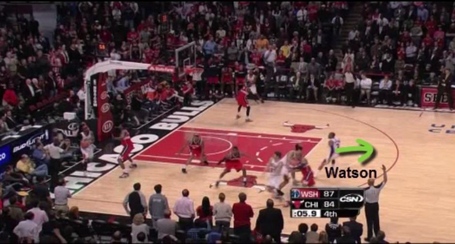 Here’s where having an athletic player like John Wall helps. The Bulls successfully used Korver to draw Wall away from Watson. That should have created enough space for Noah to set another screen to give Watson a wide open look. However, Wall is quick enough to hedge out on Korver and run back to Watson before Noah gets in position for the screen. 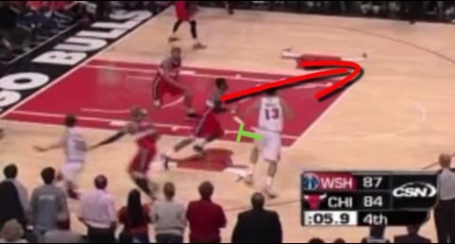 A slower player could have easily been caught by Noah’s screen, but Wall flashed a bit of his defensive potential in beating Noah and closing out on Watson. Video of the full play is below.

It would have been best if Wall didn’t fall for Watson’s pump fake, but at least he forced Watson to put the ball on the floor and reset his feet before shooting.

Little plays like this are one way to turn close losses into close wins. Last season, the Wizards went 6-5 in one-possession games, which is a bit lucky for a team as bad as they were. But with John Wall's quickness, even well-designed plays can be blown up.