NBA Draft 2012: How to Use Harrison Barnes

Share All sharing options for: NBA Draft 2012: How to Use Harrison Barnes

The pre-NBA Draft trade rumors are swirling, and the Bobcats are floating their number two pick as trade bait. If the Cavaliers move in front of the Wizards and steal Bradley Beal, it sounds like Harrison Barnes will be Ernie Grunfeld’s backup plan. Let’s take a look at how the Wizards could potentially incorporate Barnes into the offense.

Although Barnes isn’t projected to be the same caliber of shooter as Beal, he would still be the best shooter in the starting lineup. John Wall and the post players are going to get their chance to beat defenses, so Barnes will find himself waiting around at the three-point line at times next season. The shot chart below shows where Barnes was most successful during his sophomore season at North Carolina. 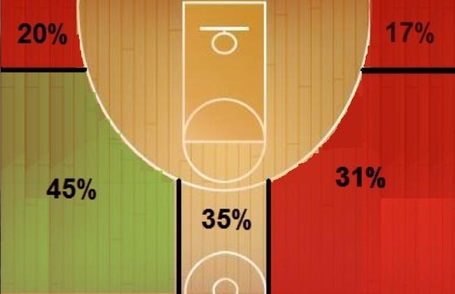 Although Barnes had a higher overall three point percentage than Bradley Beal, he was only highly successful from the left wing, which is where 40 percent of his attempts came from. He had his struggles from the corners, but there are sample size issues there, as he only had 12 shots from the corners during the entire season. The corner three is a pretty easy shot, so it should be expected that Barnes will improve on those low percentages in the NBA.

(Note: The shot chart was created using CBSSports.com shot charts, which didn’t always match up with official box scores. Nevertheless, there were only a few missing shots from Barnes’ game-by-game shot charts.)

Barnes may not turn into a lights out shooter, but he does bring some shot creation skills that Beal may lack. That is, shot creation for himself. Barnes won’t be creating any shots for his teammates, but he will find a way to make space for his stepback jumper. If Barnes gets to the left wing, he should theoretically be comfortable taking a three or isolating for a stepback jumper. Barnes is one of the best midrange shooters in the draft, and putting him on the left wing also turned him into an excellent three-point shooter. How Randy Wittman chooses to use Barnes is likely a key to his development.

Last year, Wittman had a few plays in his arsenal to get his two-guard free on the wing. One play the Wizards ran was a pseudo pick-and-roll that turned into a floppy set. In floppy, a shooter starts under the basket and has the option to run off of staggered screens on one side of the floor or a single screen on the other side. You often see Ray Allen or Rip Hamilton use this set to get open.

As Wall begins to run the pick-and-roll, the shooter (Roger Mason or Nick Young, in this case) runs into the lane. He can then choose which set of screens he wants to use. In the clips below, Mason and Young use the screen from the roll man. Because the roll man’s defender is occupied with Wall, he can’t help on Mason/Young running to the wing.

In these clips, Young and Mason end up with open three-pointers. If Barnes was running the play, he could shoot the open three or settle in for an isolation if he was covered.

On this next pick-and-roll set, the shooting guard (Jordan Crawford) starts at the top of the key while Wall runs off of the ball screen. As Wall turns the corner, Crawford gets a screen and fades to the wing. From there, he can take the open shot or drive to the basket.

Plays like this one will give Barnes the chance to do his thing, but there are legitimate worries that Barnes cannot get all the way to the hoop, instead settling for midrange jumpers. In order to live up to the lofty expectations of a number three pick, Barnes is going to have to work on his driving ability.

In this next set, Jordan Crawford runs off of three staggered screens to catch the ball on the wing. In the first clip, his defender trails the play and he uses all three screens. In the second clip, his defender anticipates the play, so he cuts directly to the wing instead of looping around the screens. Barnes will be pleased to know that no matter what the defense does, that ball is getting to the wing.

Finally, Wittman had a play to get his shooting guard into a pick-and-roll. Wall wasn’t the only guy using ball screens last year; about one third of Crawford’s offense came from pick-and-roll plays. On this play, Crawford runs off of screens to get to the wing and then receives a screen when he gets the ball.

Crawford took a lot of the ball handling responsibility last year, so it will be interesting to see if Barnes assumes a similar role. The major holes in his offensive game include his ball handling and pick-and-roll abilities, so that could mean that the Wizards have one fewer ball handler and initiator on the team.

Yesterday, Barnes expressed his concerns with playing shooting guard during media day. It would probably be a mistake to put Barnes in the same position as Crawford, running tons of pick-and-rolls and isolations. However, reducing Barnes’ responsibility means an increased workload for Wall. Barnes surely improves the team’s perimeter shooting, but beyond that, Randy Wittman will have to change up his playbook to accommodate Barnes’ game.