Share All sharing options for: NBA Draft 2012: How To Use Bradley Beal

Editor's note: This originally was published Wednesday, but I'm re-posting it now that Beal is actually the Wizards' pick.

Bradley Beal appears to be the Wizards’ number one target going into the 2012 NBA Draft. His shooting touch makes him a highly appealing player for a team lacking perimeter threats. Let’s take a look at where Beal found success in college and how the Wizards might use him in his rookie season.

Fans may want to see the ball in Bradley Beal’s hands right away, but it is very possible that things will start slow for him. John Wall, Nene and Kevin Seraphin all had high usage rates at various points last season, so, initially, Beal could spend plenty of time spotting up, waiting for the ball to get to him.

With that in mind, the shot chart below shows how Beal fared from different spots beyond the arc during his freshman season at Florida. 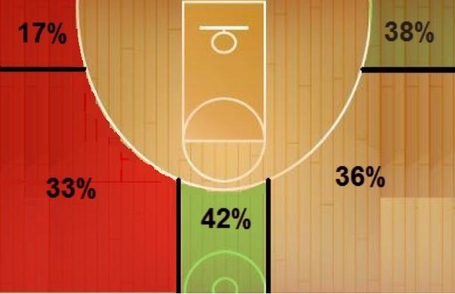 This shot chart isn’t the be-all and end-all; there is an element of randomness and sample size issues exist, as well. But it may give us an idea of how and where to use Beal as a rookie. Beal was pretty effective when he stayed away from the left side of the floor, and he shot quite well from the top of the key. He didn’t have much experience taking corner threes -- only 14 percent of his three point attempts came from the corners.

(Note: The shot chart was created using CBSSports.com shot charts, which didn’t always match up with official box scores. Nevertheless, there were only a few missing shots from Beal’s game-by-game shot charts.)

Beyond simply putting Beal on the right side of the floor and standing around, Randy Wittman may try to use off-ball screens to get Beal to his sweet spot at the top of the key. According to Draft Express, Beal is effective at using screens, and Wittman had a few plays to free up shooters at the top of the key this past season.

One way to get Beal clean looks is by running a decoy pick-and-roll. In the video below, Wall draws the defense’s attention by running a pick-and-roll on one side of the floor, while Beal (potentially) gets a screen on the other side of the floor. The defense is threatened by Wall, so they can’t focus their attention on helping on Beal. This play worked for Jordan Crawford, so it should work for Beal, as well.

A different pick-and-roll decoy involves having the roll man set another screen instead of looking for the ball. In the video below, we see the pick-and-roll again, but this time the defense attacks the ball handler as he dribbles over the screen. That leaves James Singleton open on the roll. But instead of looking for the ball, he goes to set another screen for Roger Mason. Mason's defender gets no help and the result is a wide open three. We can pretend that Beal is Mason as he drains this three.

All of those aforementioned post touches for Nene and Seraphin could benefit Beal beyond just spot-up opportunities. Even if you have a quality post scorer, offenses can’t simply stand around and watch him operate for the whole game. Most defenses will eventually figure out how to send a double team and where to recover. In order to counter that, the Wizards can set off-ball screens while Nene or Seraphin have the ball. The video below shows Crawford using off-ball screens while the defense watches the post player.

When the Wizards go to the horns set, Beal may find himself as the recipient of a double screen to get to the top of the key. This action was successful in freeing up Cartier Martin for open jumpers, and giving Beal some relatively easy shots from his sweet spot could help the rookie gain confidence.

Although Beal didn't have much experience shooting corner threes at Florida, they are one of the most efficient shots an NBA player can take. He hit his threes from the right corner, and it just so happens that the Wizards had a nifty play to get Nick Young an open three from the right corner. There's a lot of movement and screening, both on- and off-ball, until Young gets a screen and darts to the corner for an open shot. Check it out below.

In the 2011-12 season, the Wizards were one of the worst teams in the NBA in points per off-ball screening possession, ranking 26th. Obviously, the lack of shooters really impacts the Wizards here. Adding Beal will not only help space the floor for John Wall and others, but it could also allow the Wizards to open up their playbook and be more productive with their off-ball screens.