A History Of The Third Pick In The NBA Draft

Share All sharing options for: A History Of The Third Pick In The NBA Draft

When David Stern announced that the Washington Wizards will be picking third in the 2012 NBA draft, fan reaction was at best lukewarm. Sure, the Wizards didn't plummet as far back in the lottery as they have in less fortunate years, but the third pick? In the words of local folk hero and former team captain Andray "7 Day Dray" Blatche, "C'mon son!" The third pick is good but it's not great, and this team needs at least one more great young player if it's to follow the traditional Big Three model of building a successful NBA team.

But is all hope of bringing in an elite player lost? What can Washington expect out of their next high-profile rookie? And how will this impact the Wizards over the next few years? The answers after the jump.

It sounds counterintuitive, but there's a case to be made that picking third in the NBA draft is actually better than picking second. Statistician Arturo Galleti analyzed draft data for every year from 1977 to 2006 and came to a surprising conclusion: After the first pick in the NBA draft, the third pick is the most valuable when salary and production are objectively taken into account. Advanced statistics pioneer Roland Beech even found that the third pick is actually the safest in terms of whether or not a player will develop into a star, with 85 percent of players chosen number three overall between 1989 and 2008 becoming stars, at least based on their simple statistical production, as opposed to only 70 percent of number one overall picks chosen in the same time period.

Why? A book could be written on every possible explanation, but part of it could be that it's a safe place to pick, with a strange tendency for teams picking at number two to reach for high ceiling, low initial production players such as Andre Drummond Hasheem Thabeet and Perry Jones Stromile Swift, with the hopes that they'll develop just the right way so as to eventually become even more valuable than the typical sure-fire franchise player available at number one. The third pick, meanwhile, just seems to lead to consistent players. Not a ton of superstars, sure, but the kind of great-but-not-quite-franchise-caliber player that could realistically play the Westbrook or Gasol to John Wall's Durant or Kobe is traditionally there.

Because of variations in role and position, it can be misleading to look at simple points, rebounds and assists when comparing a vastly different group of players, but PER is a pretty objective statistic. Based on this, Washington can expect mediocre first year production out of the pick, with an average PER of about 14 for number three picks since 2000. 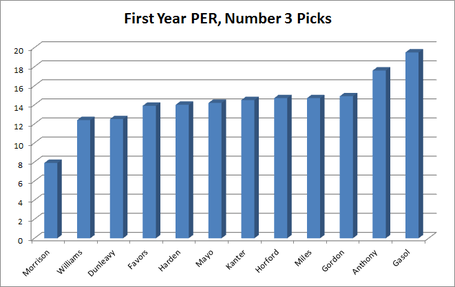 Note: PER is an advanced statistic developed by John Hollinger that measures a player's productivity and efficiency when pace is factored in compared to the rest of the league, with 15 being set as the average each year. If you're unfamiliar with it, just keep in mind that 15 is average, anything over 20 is usually an all-star, and anything below 10 is usually a bad player, although the stat doesn't take into account intangibles like defense, screen setting, dominating the ball, etc.

A PER of 14 is technically below average, but for a player who's primary responsibilities will most likely revolve around hitting open shots, playing man to man defense, and assuming a secondary playmaking role to John Wall, 14 isn't bad.

Win shares tell roughly the same story with regard to the third pick. Players chosen third overall since 2000 have produced an average of about .75 wins per 48 minutes, which is below average but not particularly bad. 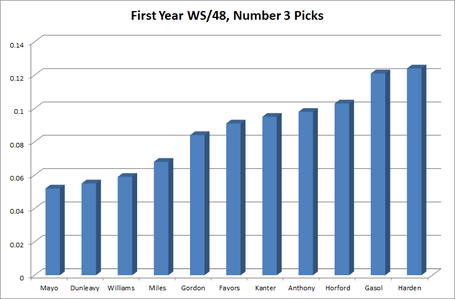 Note: Win Shares Per 48 Minutes is an advanced stat measuring the number of wins each player produces in 48 minutes of playing time. Simplifying a bit, 0.1 is average, below 0.05 is usually a scrub, and above 0.15 is usually an all-star. It tends to reward big men over perimeter guys due to their role in help defense and their inflated shooting percentages relative to guards due to things like putbacks and easy buckets set up by ball handlers and playmakers. Also, Adam Morrison's numbers were scrubbed from the graph due to posting negative wins, which is usually a sign that someone will be out of the league very soon, which wound up being the case.

Producing about .75 wins per 48 minutes of playing time isn't great, but it's not awful, either, and it's not unrealistic to expect this of the players available to Washington at number three.

Looking past next season and barring any extreme good or bad fortune, Washington should have an above average player on a contract roughly as expensive as half of the Mid-Level Exception. Due to the nature of rookie contracts and Bird Rights, players are typically locked into the franchise that drafted them for the first seven years of their careers. With this in mind, Washington should be able to look forward to at least somewhat above average production from the pick over the life of the player selected's contract, with the the third pick in the draft's yearly PER rising by an average of about a half a point per season for the first seven years of his career. 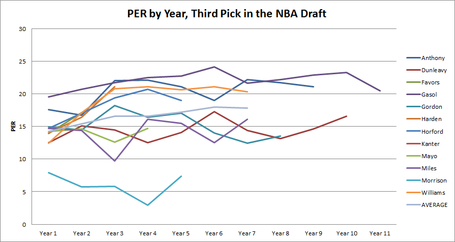 This bodes very well for Washington, at least assuming a perimeter player is chosen. With John Wall (hopefully) tearing up the league as he enters his prime, a second star on the wing would give Washington one of the league's most feared backcourts, reminiscient of the team's pseudo-glory days in the mid-aughties when Gilbert Arenas and Larry Hughes were carving up opposing backcourts on a nightly basis. The downside to this is that the third pick, whoever it is, will most likely not be better than Wall, which could limit the Wizards' upside in a league dominated by top heavy teams with multiple all-NBA caliber talents.

So what do all of these statistics and comparisons tell us? In short, no matter how much the fanbase and front office sweats out the draft, worrying about things like intangibles and wingspan and college productivity and high school reputation, the Wizards are pretty unlikely to mess this up. The next Kevin Durant likely won't be coming to Washington on Thursday. The next Caron Butler, Tony Parker, or Chauncey Billups, though? Now that's a pretty reasonable bet. After that, the big question becomes: Is that enough?