With the 2012 NBA Draft getting closer, the possibility of Michael Kidd-Gilchrist being drafted by the Wizards is becoming more and more realistic. Kidd-Gilchrist produced in college, but his game has clear flaws, most notably his shooting and ball handling abilities. Without improvement in these areas, his best case scenario as an NBA player will be as a dominant defensive player and fast break finisher a la Gerald Wallace. This would make him a useful player, but probably not the second or third best player on a championship team.

Due to his work ethic, coachability, and motor, numerous scouts and fans have been high on him as someone who will improve in the NBA and become a good value as the third pick in the 2012 draft. But how realistic are his chances for becoming even an above-average offensive player? What kind of improvements will be key to his development? The answer after the jump.

Kidd-Gilchrist's main value to his college and future NBA teams will be his defense, and that's hard to quantify. However, numbers can tell you a lot about a player's ability to produce on offense, and that's going to be the difference between Kidd-Gilchrist being a great role player -- which can be found anywhere in the first round and occasionally in the second round -- and a true stud two-way player who can defend multiple positions at an elite level while scoring at least enough to keep defenses honest.

Ron Artest Metta World Peace, Tony Allen, Corey Brewer and Wallace all entered the NBA with reputations and skill sets that are similar to MKG's. Each player had their own strengths and weaknesses, but the common thread among them is that they came to the league as versatile wings with a reputation for hustle and defense and with question marks about their ability to play a major offensive role. In terms of college production, all of them were relatively similar to Kidd-Gilchrist. 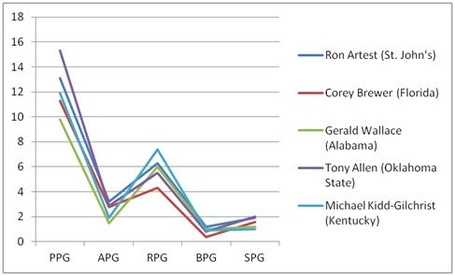 (All statistics are from college and unadjusted for pace, with the graph being based on college career averages)

Coming out of college, Kidd-Gilchrist seems to be a better rebounder than almost any of the players he's being compared to, with the possible exception of Wallace, who played far fewer minutes than anyone else we've mentioned. The main cause for concern should be MKG's usage rate. He created less offense than any of the players being examined, both for himself and for others. Still, he generally seems to fit in nicely with all of the other players, with the possible exception of Brewer, who was a much better passer and far worse rebounder in college. Kidd-Gilchrist's loaded Kentucky squad is also a factor to consider in his low usage number.

As far as his NBA development is concerned, his similarity to Wallace, World Peace and Allen should have fans at least slightly worried, though. While each of these players eventually developed an offensive role, be it as a spot-up shooter like Artest or as a slasher and finisher like Allen or Wallace, the closest any of them came to being a top three player on an elite team was Artest with the 2009 Rockets team that gave the eventual-champion Lakers a scare in the second round of the playoffs. Meanwhile, Allen, Wallace and Brewer have only experienced team success as complementary offensive players who finish transition plays but are otherwise their team's fourth or fifth option.

Based on these players, the difference between stardom and being merely a useful player for Kidd-Gilchrist is going to come down to how well he can shoot, especially from the corner and the wings. While World Peace is rarely thought of as a great offensive player, his shooting ability has allowed him to stay out of the way when he has an unfavorable match-up. That's all Michael Kidd-Gilchrist will need in order to play a meaningful offensive role.

Whether or not he can do it is up for debate. There are legitimate concerns that his jump shot is so fundamentally flawed that he'll never be able to become a consistent shooter. However, World Peace was an even worse shooter at MKG's age, so there's at least a precedent for a natural glue guy growing into a greater offensive role through hard work.

Will Kidd-Gilchrist's already legendary work ethic be enough for him to will his way to a jump shot? No one knows at this point, but if the Wizards select him, it could very well mean the difference between multiple playoff runs and utter mediocrity.