One way that coaches impact games is by putting their players in position to succeed during crunch time. With Randy Wittman coming back next year, let’s take a look at two of end-of-game plays from this past season. Beyond the Xs and Os, these plays may offer a window into John Wall’s development under Wittman.

On March 22 against the Pacers, the Wizards were down by two with 10 seconds remaining, and Wittman called a very effective play to get the Wizards a shot.

Wall received the inbounds pass and looks to run a pick-and-roll with Jordan Crawford. A nice wrinkle to watch is how Crawford runs off a screen from Trevor Booker prior to setting the ball screen. This simply makes Paul George’s job as a defender more difficult. George can’t get ready to defend the pick-and-roll because he’s chasing Crawford around a screen. 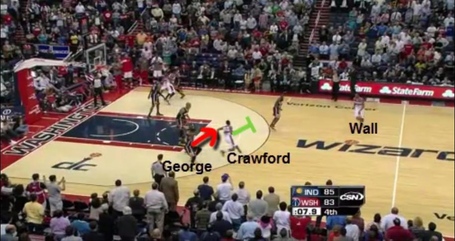 As Crawford sets the ball screen, the Pacers get confused as to whether they are switching or not. Both George and Darren Collison make a move toward Wall, leaving Crawford open. 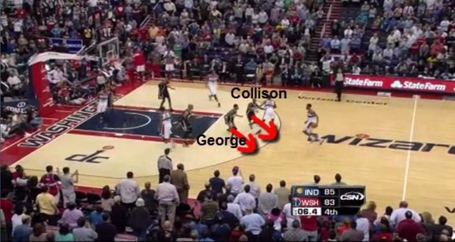 After setting the screen for Wall, Crawford pops to the wing. For good measure, Nene sets a screen on Collison to prevent him from recovering to Crawford. 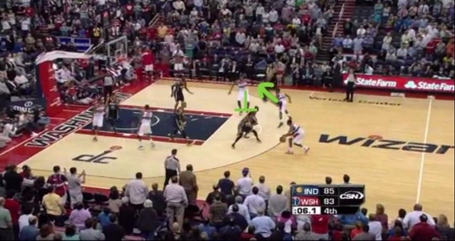 Here we see that Crawford is wide open, but Wall doesn’t make the pass. Instead he tries to go one-on-one with George. After the game, Wall said that he didn’t see Crawford, but that seems unlikely because he’s looking right at him in the screenshot below. 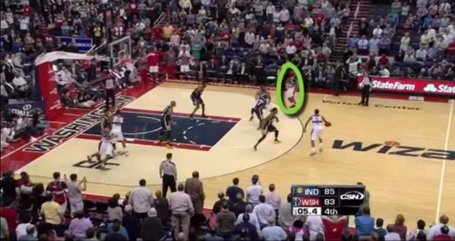 Wall breaks the play and decides to take the game into his own hands. He nearly pulls it off as his shot comes just after the buzzer. The full play is below. Pay attention to Wittman on the sidelines during the play. He signals for the pass to Crawford and then looks dumbfounded when Wall decides to go one-on-one. Clearly frustrated, he doesn’t pay much attention to the rest of the play.

Against Indiana, we saw the good and bad side of a talented yet inexperienced player. Wall missed a wide open teammate so he could play hero ball. He then flashed a bit of his talent when he almost made it work.

Two days later against Atlanta, Wittman called the same play, but we saw a very different version of John Wall.

The play begins the same way, with Wall getting the ball and Crawford coming to set a screen. As Crawford sets the ball screen, the Hawks defenders get tangled up and fall down. 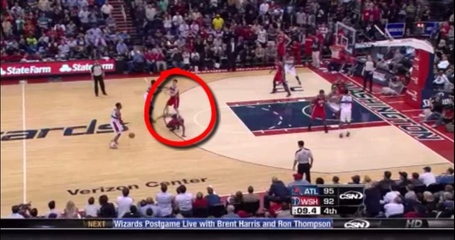 Based on Wall’s actions and Roger Mason Jr.’s urgency to run off of those baseline screens, it appears that the call was to get the ball to Mason instead of looking to Crawford. This is a shame because it looks like Crawford would have been wide open again. The execution on the weak side of the floor isn’t crisp (probably because they knew the ball wasn’t coming their way), but Josh Smith doesn’t look to help Kirk Hinrich on the screen, which would have left Crawford open on the wing. 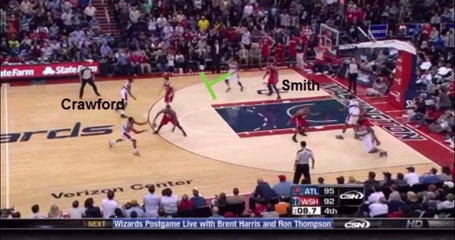 Instead of taking advantage of the fallen Hawks defender and looking to Crawford (or simply using his dribble), Wall passes to Roger Mason, Jr. in the corner. He can’t get a shot off, and the Wizards have to scramble for a three, which misses. The full play is below.

Watching both of these plays and Wittman's reaction in the Indiana game, one must wonder if Wall’s freedom was limited against Atlanta. As a long-term teaching strategy this might work, but it ultimately cost the Wizards the game against the Hawks because Wall couldn’t take advantage of the opportunity that presented itself.

Wall obviously has a lot of learning left to do. As he gains experience, he will know when to take the game into his own hands and when to look to his teammates.

Do you think Randy Wittman put Wall on a short leash after the Indiana game? If he did, what do you think about his teaching strategy? Let us know in the comments below.