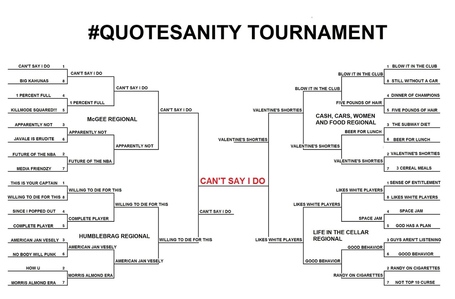 There wasn't much Randy Wittman could do to get through to JaVale McGee about why he was benched, and there was nothing anyone could do to stop Can't Say I Do from winning #QUOTESANITY. With 59 percent of the vote, Can't Say I Do took down Valentine's Shories to become this year's champion.

Although Can't Say I Do was presumptive favorite from the onset, it faced some stiff competition along the way to the title. As we all expected, the McGee Bracket was the deepest of the four, and at times, made us question whether or not they'd even survive as the best McGee quote. Then, it had to face off against Andray Blatche's career-defining quote in the semifinals, where it hung on with just 52 percent of the vote. After all that, the finals were a relative breeze. Can't Say I Do's margin of victory in the finals over Valentine's Shorties was the second largest win for Can't Say I Do in the tournament.

Now that Can't Say I Do has taken its rightful spot as #QUOTESANITY champion, it can begin exploring how to maximize its newfound fame. Cant Say I Do has already come to terms with Truth About It on a movie deal, and we expect to see much more down the pipe. We can't say we know exactly what just yet, but we'll figure it out sooner or later.