Welcome to #QUOTESANITY: Voting on the top Wizards Quote From This Year

Share All sharing options for: Welcome to #QUOTESANITY: Voting on the top Wizards Quote From This Year 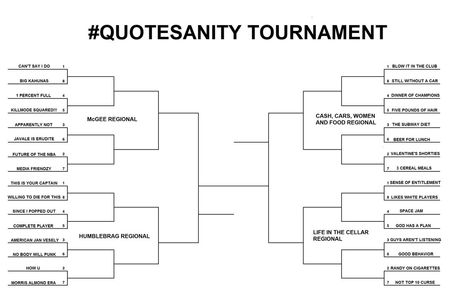 Despite a lockout-shortened season, this year's squad really brought it with memorable sayings. Gilbert Arenas had a run in 2006-07 that will probably never be matched, but the depth on this team from top to bottom is something to truly be marveled. And since the Wizards aren't in the playoffs this season, we need to crown a champion in something, so we give you #QUOTESANITY.
Each day, we'll post two quote battles and give you 24 hours to vote it out for which one you think is the better quote. The criteria for what you determine is best is entirely up to you.
After the jump, a look back at the quotes that just missed the cut for #QUOTESANITY.

Life in the Cellar Region