While the Wizards have had inconsistent performances over this recent stretch of games, we've seen consistent trends emerge from certain players. With the help of help of MySynergySports.com, let's take a look at the good and the bad when it comes to the youngsters.

Vesely has taken his share of criticism this season. Coming in as the No. 6 pick in the draft and only putting up a 10 PER will do that. But let’s have positive outlook for the moment and talk about something that he does well.

According to MySynergySports.com, Vesely has been below average as the roll-man in the pick-and-roll, averaging 0.88 points per possession in that situation. However, he has the tools to be quite effective as a pick-and-roll partner. He is an explosive athlete who is among the best at finishing at the rim.

What doesn’t get captured in those below average pick-and-roll efficiency numbers is his passing ability. In recent games, he has been able to catch the ball away from the rim, recognize the help defense, and hit the open man. If Vesely is around when the Wizards get some perimeter talent, his passing ability off the roll will be very helpful. One could envision him being used as a reliable outlet for John Wall, similar to how Joakim Noah functions for Derrick Rose. The video below shows some of his quick decision-making off of the roll in recent games.

Singleton is another rookie who has had an underwhelming season. On offense, he has been filling the role of spot-up shooter, which isn’t ideal for him or the Wizards. According to MySynergySports.com, over 40 percent of his possessions are in spot-up situations. Over his career at Florida State, Singleton only shot 33 percent from three-point range, so shooting 34 percent from NBA range is the one small positive that can be taken away from this season. (Note: Almost all of his three-point attempts are wide open, so feel free to spin this as a negative.)

Mike touched on it a bit already, but his offensive game would improve if he would move without the ball once in a while. Whether by design or through Singleton’s own inaction, he almost never makes off-ball cuts. There are other players in similar situations as Singleton: stuck in a spot-up role with limited shooting ability. The difference is that these players also change things up by cutting to the basket and crashing the offensive boards. Singleton doesn’t do much of either. The chart below shows the percentage of possessions used by type and offensive rebounding rate among some young wing players. None of these guys are their team's primary creator, yet none would be considered a sharpshooter, either. Among this group, Singleton spends the most time spotting up, the least time cutting to the hoop, and barely out-rebounds the 6’2" Avery Bradley.

All of those numbers indicate that Singleton doesn’t move on offense, and the video backs it up. Watch the clips below to see some of Singleton’s recent missed cutting opportunities. Note how many times his defender turns his back while Singleton remains motionless.

On some plays it's possible that it is his responsibility to rotate to the top of the key and get back on defense, but the floor is mostly balanced in these examples. Over the course of the entire season, he should have been much more active off of the ball.

For some examples of how to attack a defense that isn’t paying attention to you, check out these videos of Alec Burks and Avery Bradley cutting and sneaking in for offensive rebounds.

In the second quarter versus the Bulls, the Wizards ran a variation of a common play. The Wizards can often be seen in the "horns" set in the halfcourt: two bigs at the elbows and the two wing players in the corners. 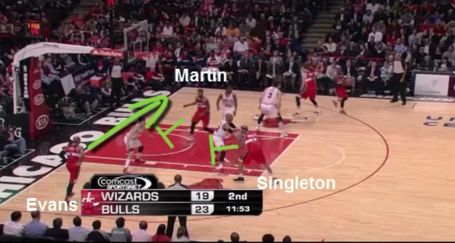 Later in the quarter the Wizards changed it up by instead screening for Kevin Seraphin at the elbow. The video below shows the full play. Martin comes across the lane as if he is going to set another screen for Evans on the baseline. He even carries out his deception with his eyes; he looks at Evans the whole time. That is, until the last moment, when he cuts toward Carlos Boozer and sets a mean screen to free up Seraphin. Seraphin misses the running hook, but it was a well-run play to get an open look against a tough defense.

Last time the Wizards faced the Milwaukee Bucks, John Wall saw a pick-and-roll defense that was playing very soft, daring him to pull up for a jumper. Wall did the right thing by attacking the defense, but his shots didn’t fall. This time against the Bucks, Drew Gooden continued to give Wall the jumper and Wall continued his attacking ways. Wall was rewarded with positive results, either scoring or getting fouled on three of his five pick-and-roll possessions when seeing the soft, containing style of defense. The clips below show his forays to the hoop against this defense.

If you recall, last week it was noted that Seraphin wasn’t doing a good enough job of establishing post position. In fact, he was needlessly working himself into bad position just to receive the ball. In the Cavaliers game, it looked like he got some advice about this exact matter. Check out the video below and observe how Seraphin stops in the middle of the lane and seals Tristan Thompson on his back.

This week we've seen some encouraging signs from John Wall, Kevin Seraphin, and Jan Vesely. And if anyone witnesses Chris Singleton move from that corner, let your fellow Wizards fans know.