Wizards To Sell Naming Rights On Jerseys To Nicorette

Share All sharing options for: Wizards To Sell Naming Rights On Jerseys To Nicorette

Editor's Note: Yes, of course this is an April Fools joke.

In a move that will make the Washington Wizards pioneers in the American sports world, the franchise has decided to sell the naming rights on their jerseys to Nicorette, sources involved with the franchise and the company tell Bullets Forever. The above image, obtained by Bullets Forever on Saturday, is a prototype of the new uniforms, which are expected to be finalized by the start of the 2012-13 season.

Wizards owner Ted Leonsis has always been at the forefront of new ideas, and has decided to follow through with the measure to help create another revenue stream with the franchise. While Leonsis just authorized a uniform change last season, sources tell Bullets Forever that he was so inspired by interim coach Randy Wittman's smoking analogies that he wanted to provide the players a constant reminder of the habits they intend to break.

"He really liked the message Wittman was sending to his players," a Wizards source said. "Whether Wittman remains with the franchise or not, [Leonsis] wants that culture to remain in place."

Wittman, the Wizards' interim coach after Flip Saunders was fired in January, has compared his players' on-court mannerisms to smokers numerous times, suggesting that his primary role is to help cure the players of those bad habits.

"If you're a smoker, you ain't going to drop those habits in a day," Wittman said following his first game, a win over the Charlotte Bobcats in January. "I've got to help them kick some of these bad habits that we're in. That's all it is. We've fallen into playing a way that's not conducive for us to win. So when I see them pull out a cigarette, I got to take it out of my mouth."

A normal uniform change takes longer to complete, but a source at the league office told Bullets Forever that the league will make an exception with the Wizards because they are curious about whether the move to sponsor uniforms will result in extra revenue. If the Wizards' experiment is successful, the source said they may recommend that other teams sell the naming rights on their jerseys.

"If this works, why couldn't Rogaine sponsor the Heat jerseys? They'd be foolish to pass up that marketing opportunity," the source said.

Leonsis would not confirm the news when reached by Bullets Forever via email, but did want to make one point very clear.

"Whatever we do with our uniforms, it does not mean we are changing our name back to the Bullets," he wrote. "I want to be very clear about that."

UPDATE: We have obtained another prototype of the uniforms. Here it is. 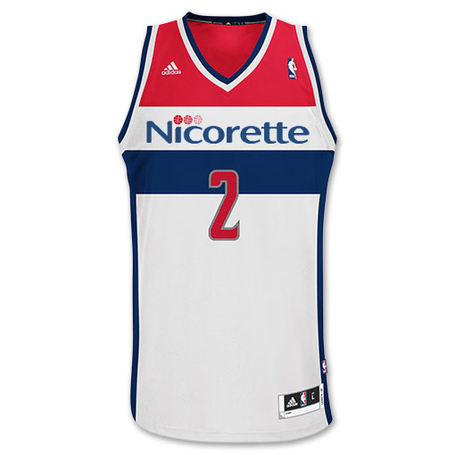