In my mind, the biggest moment of the Washington Wizards' 106-101 win over the Los Angeles Lakers came with 50 seconds left in the game. The Wizards held a three-point lead and had a critical offensive possession. John Wall dribbled the ball down the court and had a pass deflected by Derek Fisher out of bounds. Coach Randy Wittman called timeout, and a play needed to be drawn up to get a player open. The Wizards' last few possessions had been poor ones, so another empty trip would have put the win in jeopardy.

In so many situations, you'll see a coach prattle on for a while in the huddle, only to call an isolation for his best player. This bothers me to no end. I've heard the argument from a former NBA coach before (basically, he said that you don't want to design anything too intricate because it's that many more things players can screw up), but I don't buy it. If you have confidence in your players, you call a play to help get them free and trust them to execute it.

That's why I want to give special credit to Wittman for drawing up a beautiful out-of-bounds play that got Nick Young an open jumper that he hit.

The play began with Wall running up to the top of the key to catch the ball. At the opposite side of the floor, Trevor Booker turned to set a down screen for Young. It appeared like the play would be simple: a screen for Young to pop out on the left side and take a catch-and-shoot jumper. 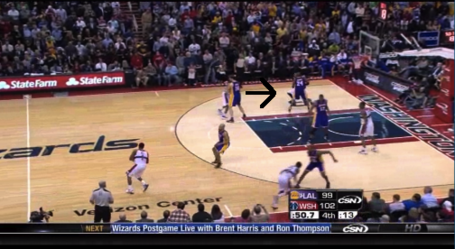 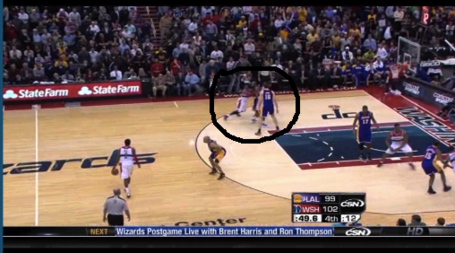 But all is not as it seems. As it turns out, Booker is merely screening for Young to have the space necessary to set a pick for Wall. This is a guard-guard screen, and it's something you see teams like the Boston Celtics and Atlanta Hawks run. The idea is to provide a moment of confusion for the opponent. Rarely does a team switch screens, but it's probably the right play for a guard-guard pick. The hope is that the defense thinks just long enough to open something up for one of the guards. 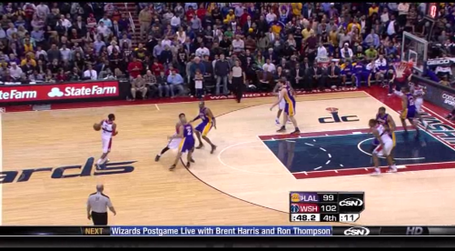 The Lakers switch alertly, though, with Kobe Bryant going to Wall and Derek Fisher sticking on Young. End of the play, right? No sir. Notice Kevin Seraphin on the block in that screenshot? Watch as he sneaks behind Fisher to set a great backscreen to free Young for an open jumper. 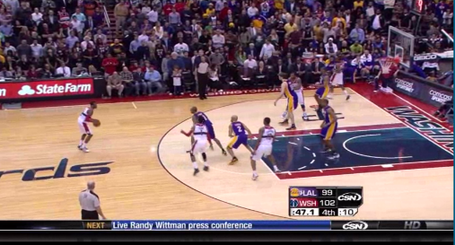 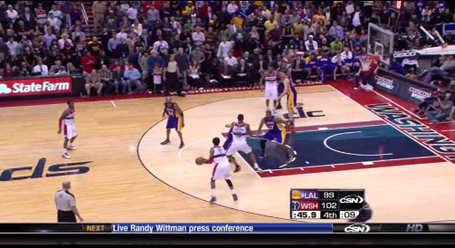 Young's wide open there for a shot. As it turns out, he took a dribble in and made it more difficult than it needed to be, but he made the shot anyway over Andrew Bynum's outstretched arm. 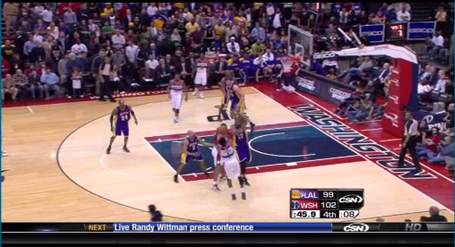 To be completely honest, I didn't think the Wizards could execute an elaborate play like this, so when the press scrum around Young broke up, I pulled Young aside briefly and asked him a quick question about the play. Young explained the play briefly, then told me that this was the first time Wittman had called that specific play to be run. The Lakers certainly seemed surprised by it.

Kudos, Randy Wittman, and kudos to the Wizards' players for executing it to perfection.