The Washington Wizards' last real chance to defeat the Indiana Pacers on Thursday ended when John Wall's pass to a rolling Nene was well off the mark and went into the back court. A basket would have tied the game; a three-point play, which was a good possibility given the play that was drawn up, would have given Washington the lead. Instead, the turnover pretty much killed the Wizards' chances.

After the game, Randy Wittman told Wall that he missed an opportunity to make the simple play. Via Michael Lee's game story.

Wittman showed Wall film of the sequence immediately after the game, advising him to slow down and not make the game more complicated. "You have to make simple, simple plays down the stretch. It might sound trivial and fundamental, but it has to be the easiest play you can make down the stretch and if it's not, then you can't take the chance," Wittman said.

Wall agreed with his coach, saying he "hesitated" and "read the situation wrong." But do you agree with Wittman's take? Is Wall being too hard on himself? Let's look at the tape.

As Wittman noted, the play was a standard high pick and roll between Wall and Nene. The shot clock was winding down, so the play had to happen quickly. Here's the moment where Wittman felt Wall missed his chance. 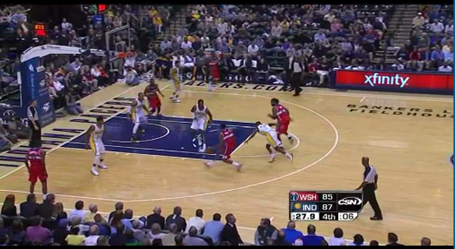 Now, here's the moment where Wall tried to make the play. 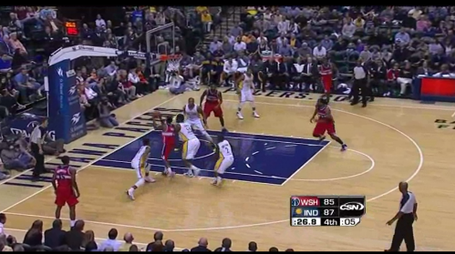 The first screenshot is the moment where Wall "hesitated" in making the pass. Instead, he threw in a change of speed dribble, got by Roy Hibbert, and instead of shooting, he figured Nene would dive to the rim with him. However, Nene was taking a second to process why Wall didn't throw him the pass the first time and wasn't quite where Wall needed him to be.

Should Wall have made the first pass? Judging from these screenshots, he probably should have. Nevertheless, you'd like to see Nene be a little bit quicker in providing his point guard a good passing lane once the play broke down.