Wizards Vs. Spurs Clipboard: John Wall And Playing Every Second Of Every Possession

Share All sharing options for: Wizards Vs. Spurs Clipboard: John Wall And Playing Every Second Of Every Possession

John Wall's skill development continues at earnest. Perhaps it'd be nice if that progress was faster, but it's developing. He's becoming a better jump-shooter, slowly learning to change speeds well, is getting to the free-throw line more often and will soon figure out how to finish around the rim. (Don't believe me on the last one? Look at Derrick Rose's second-year numbers).

But there is one element of Wall's game that hasn't developed, and it's larger than something as simple as skill development. We saw it a lot in last night's loss to the San Antonio Spurs. In that loss, this specific shortcoming was exposed by Tony Parker, who is essentially the anti-Wall in this respect.

The shortcoming? Wall loses concentration too much within possessions.

I see it a lot on both ends of the floor. When Wall's not actively involved in a play, he tends to sit up and disengage a bit. Sometimes, he's able to compensate because of his supreme athleticism, but more often than not, the athletes in the NBA are too good for him to get the job done after falling behind. We've already discussed how Wall often fails to help his team out with transition defense. Now, let's take a look at a couple plays from last night where Wall disengaging hurts his team.

DEFENSE, OFF THE BALL

This is a play where the Spurs run Parker off a down screen to free him to reset the offense. It's a staple of theirs that takes advantage of Parker's speed. It's hard enough to contain him when he's standing still, but it's extra hard when he is moving. The key is to prevent Parker from just catching and making a quick decision. That requires bumping him on the cut and staying attached to his hip as you trail him.

Right off the bat, Wall sets himself up for failure by loafing out of bounds and bodying Parker on the wrong side. 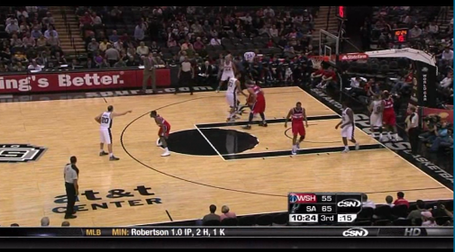 Notice how Wall is also completely upright here. That means it's no surprise that he's slow to react to Parker's burst. 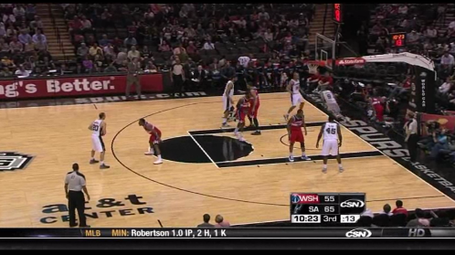 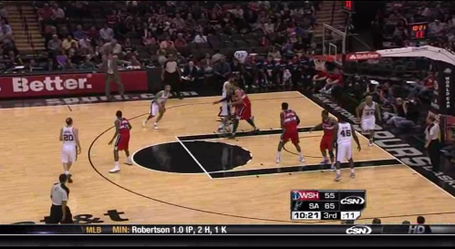 Parker ends up taking and missing a wide-open jumper, but this is a prime scoring opportunity because of Wall's lack of preparation on the play.

The Wizards' pick and roll scheme as a whole is broken, so placing all the blame on Wall for Parker going off is misunderstanding how it all actually works. But on this play, notice how Wall relaxes when he thinks he's angled Parker off, allowing Parker to accelerate for an easy layup. 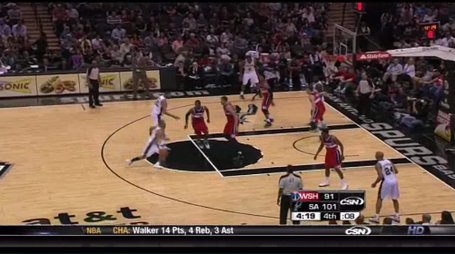 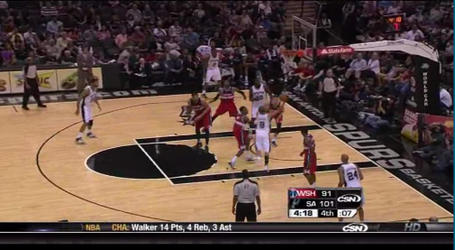 In the frame before the first one, Wall's in decent position. He cut off one pick and roll, then seemingly was there to cut off the second. But as he sat up, Parker went right by him. That split-second of relaxing cost the Wizards a defensive stop.

There are a few clips I will show here, all from number of instances in the game. Understandably, there's a lot not known here. Wall may be slow to cut because he's being asked to protect in transition the other way. The spacing may not have been there. But still, it frustrates me that Wall takes himself out of plays when he doesn't have the ball. One of the reasons guys like Rajon Rondo and Russell Westbrook are dangerous is they make hard basket cuts when their man turns his head. Wall still has to learn to do this.

Notice all these times when his man turns his head and Wall stands there. 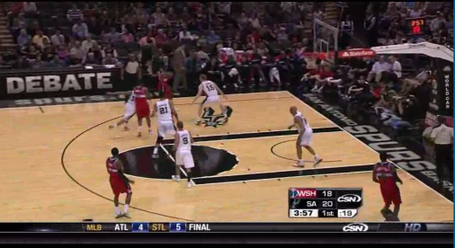 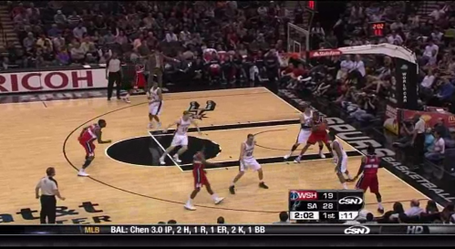 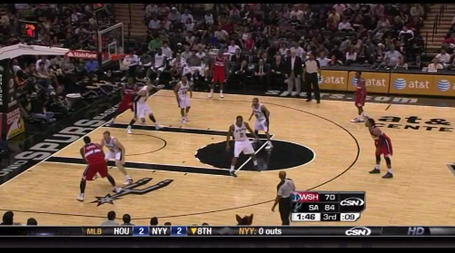 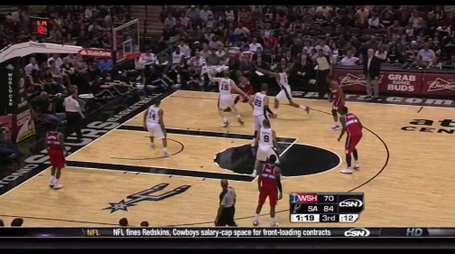 Even if Wall himself doesn't get free for a layup, he could open things up for his teammates by forcing defenders to pay attention to him. In that second screenshot, Wall could cut down the lane and open Andray Blatche for a wide-open jumper. (Sure, Blatche probably won't make it, but the point is that it's an open look Wall can create by moving without the ball). In that first clip, Wall could just as easily cut to the ball, which might give Trevor Booker the split second he needs to be open rolling to the basket.

Ever since he's taken over, Randy Wittman has talked about breaking bad habits. There are tons of players on this team that have bad habits, all of which are probably worse than Wall's. But the thing that we have to understand is that Wall too has bad habits that need to be fixed. I'm not concerned about Wall developing all the skills needed to be a superstar player in this league. I am concerned that he may not be as efficient as he could be until he learns to fix these bad habits.

What will it take? That's a good question. Perhaps Wall has to be in even better shape than he is in so that he doesn't get tired and have momentary lapses of concentration. Perhaps it's as simple as just making more of an effort to do things he probably never had to do on lower levels. Perhaps nobody on the Wizards has pointed these things out to him yet, in which case he doesn't know what he's doing wrong.

Whatever the solution is, I hope the Wizards keep working with him to make sure he accomplishes it and fixes these momentary on-court lapses.