"If you're not scoring the ball, then you got to find your teammates. That's what I did. We told [Trevor Booker] to set the screen and catch the ball at the free-throw line, and we let him make the play."

-John Wall after Monday night's 111-108 win over the Toronto Raptors.

There's no question that John Wall and the rest of the Washington Wizards struggle in the pick and roll. Each of the Wizards' ball-handlers (Wall, Nick Young and Jordan Crawford) have flaws that limit their effectiveness -- Wall's jump shot, Young's poor passing instincts and Crawford's propensity to search shots. Many of the Wizards' big men struggle to set screens, roll properly and finish or make plays as the roll man.

Nevertheless, Wizards fans should be encouraged by Wall's own performance in the pick and roll late in their 111-108 win over the Toronto Raptors. The Raptors elected to trap Wall and prevent him from turning the corner, a different look than simply going under the screen, the default strategy most teams use on Wall. For a young point guard, this adjustment can be tough. But to Wall's credit, he made the necessary read and delivered good passes to Trevor Booker to set up solid scoring opportunities.

Three plays in particular stand out. Let's take a look at the first, which resulted in two free throws for Booker with the game tied at 98. Wall and Booker run a pick and roll, and the Raptors have Linas Kleiza trap hard as Jerryd Bayless gets held up. 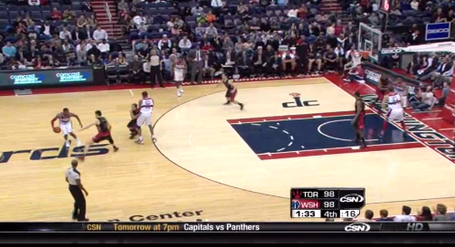 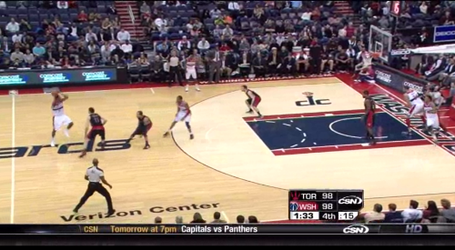 Once Booker catches the ball, he must read Jose Calderon. If Calderon comes to him, he finds Jordan Crawford on the weakside, and hopefully Crawford makes a strong basket cut or knocks down the open three. If not, Booker takes it to the basket. Calderon doesn't come fast enough and Booker uses the clear lane to draw the foul. 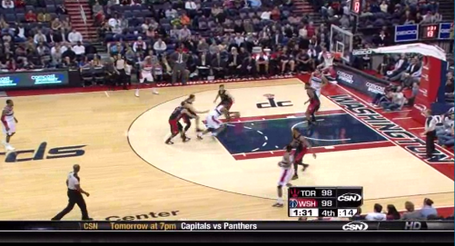 The same thing happened on a play midway through overtime. This time, Wall anticipated the trap even before he tried to turn the corner, and Booker made himself more of an outlet. Unfortunately, he missed the floater, but all parties involved had the right idea. 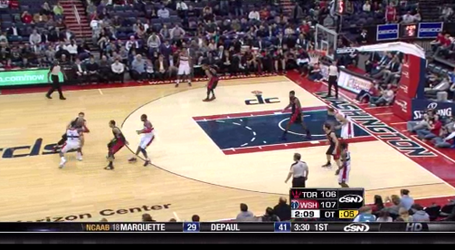 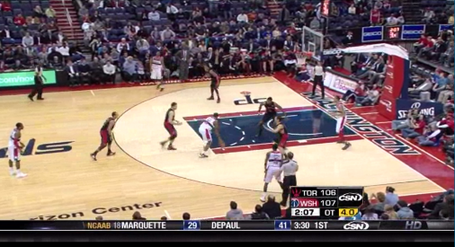 The two hooked up one final time on the Wizards' final possession, and they executed the play to perfection. This time, Wall, knowing the Raptors would trap, purposely veered left to take the trap with him and clear a huge opening for Booker. This is the kind of advanced pick and roll action we see from experienced point guards and we haven't seen much from Wall this year. Only an incredibly obvious foul by Amir Johnson stopped them. 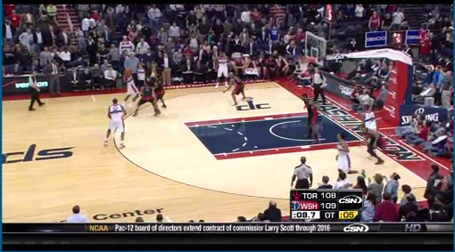 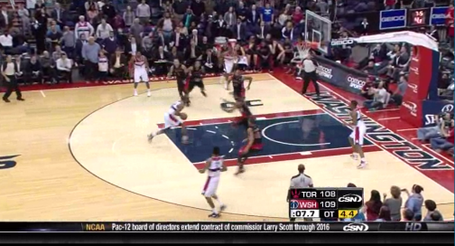 The Raptors are a pretty solid defensive team under Dwayne Casey too, so this is really encouraging stuff from Wall and Booker. Prior to the game, Randy Wittman talked about how the next step was for his players to make adjustments themselves while on the court. Wall and Booker appeared to make the necessary adjustments, and it helped the Wizards hold on in a close game.

One final note: it's interesting to see how Wall knows Booker will be ready to make the catch on these plays. Take a look at the lack of chemistry that develops on a similar pick and roll between Nick Young and JaVale McGee. 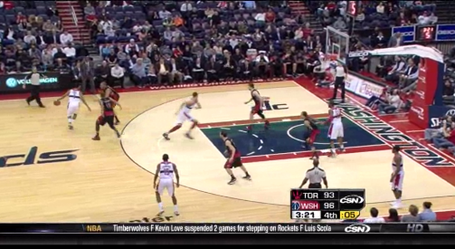 Not only does Young not have his head turned when the play needs to be made, but McGee is already rolling to the rim, completely unaware that the Raptors are trapping Young. That eventually leads to this sequence where Young is stuck and McGee is nowhere to be found. 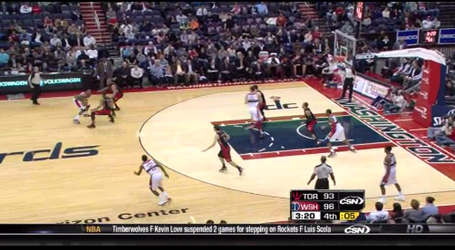 We talk a lot about basketball instincts as if it's a buzzword, but this is a case where you see them in action. Kudos to Wall and Booker for making the adjustment Young and McGee weren't able to see.