Wizards Vs. Suns Clipboard: Where Lack Of Shooters Hurts Washington

Share All sharing options for: Wizards Vs. Suns Clipboard: Where Lack Of Shooters Hurts Washington

For about two years now, I've been beating the drum about how the Washington Wizards have done a woefully inadequate job of surrounding John Wall with three-point shooters. Three-point shooters open up the floor and make it easier for Wall -- a bad perimeter shooter at this stage of his career -- to find players in their spots. Instead, the Wizards really only have a couple players who scare defenses from beyond the arc. The only player shooting even 37 percent from three-point range on the team is Nick Young, and the only other player with even a reputation for being an elite three-point shooter is Rashard Lewis, who is way down at 25 percent this year.

Having good shooters opens up so many possibilities for your offense. By contrast, not having good shooters makes life really difficult for the players who do need space to operate. Let's take a look specifically at several plays where the lack of floor spacing and shooters hurt the Wizards in Phoenix.

(As always, thanks to mySynergySports.com for the clips).

This was a play where McGee actually hit the shot, but it was certainly not the kind of look the Wizards especially wanted. The play involved Young and McGee running a pick and pop with the hopes of creating a decent look for somebody. Here's how the floor spacing looks as Young comes off the screen to his left. 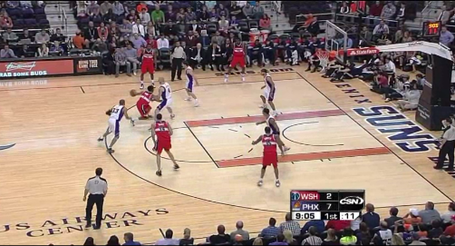 As you can see, Marcin Gortat comes to cut off Young's drive, but look at the weakside. Trevor Booker is not a jump-shooter, and because of that, he's standing on the right wing 16 feet from the basket. That allows Channing Frye to guard both McGee and Booker easily. If Booker had three-point range, like Frye, this would be an easy two-pass rotation for an open three. Instead, the play breaks down and Gortat is able to recover to McGee. 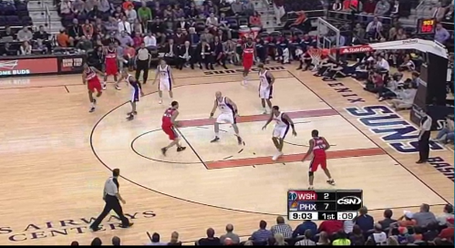 McGee made the shot, but that's a low-percentage attempt.

This play should be where the Wizards' guards and their pick and roll partner make their living. Jordan Crawford and Booker (in this case) run a pick and roll, and the pocket bounce pass to Booker is wide open. Booker has a ton of space and really should explode for an easy layup.

The problem? Jan Vesely, who has no shooting ability, is in the way. 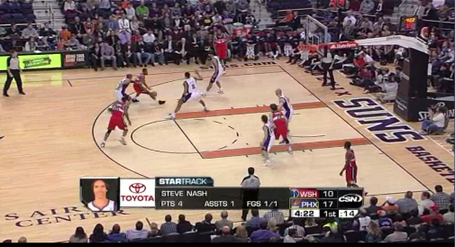 There's actually a double-whammy of a problem here. Not only is Vesely right in Booker's lane to dive to the rim, but the man in the weakside corner is Wall, who has no three-point shooting ability. That means that not only is Gortat right there to cut off the dive to the rim, but Nash is also there to rush out on Booker to prevent the open jumper.

The end result is Booker's lane is cut off, forcing him to settle for a wild hook shot that misses. 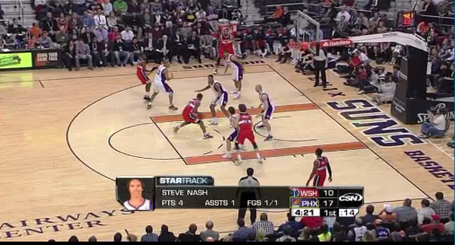 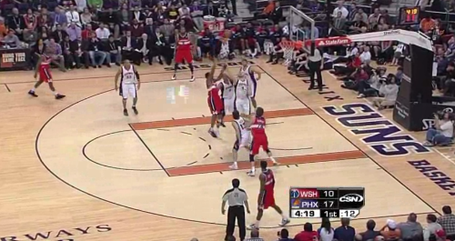 Vesely's presence means Booker can't throw the pass to Wall in the corner, and Wall's inability to hit that shot anyway allows Nash to jump in and be another pest as Booker tries the hook shot.

This is about as bad of a spacing fail as you'll ever see. Wall gets dinged with the turnover here, but you tell me exactly what he's supposed to do. 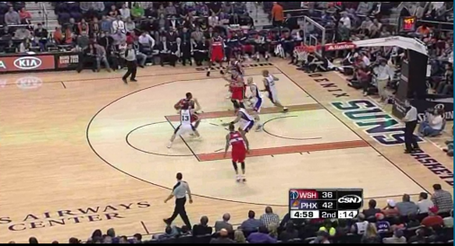 You have McGee and Young, the latter of whom should be camped out by the three-point line, standing on top of each other on one side, and you have Lewis, who should be a shooter, sitting at 17 feet instead of in the corner. No point guard is able to create anything with that kind of horrendous spacing.

By now, the Wizards had begun to fall apart thanks to rushed shots and selfish offensive play. On this play, though, bad spacing is what caused a missed shot. This is very similar to Play 2, with Vesely standing on the block and preventing Booker from making a straight drive to the basket. 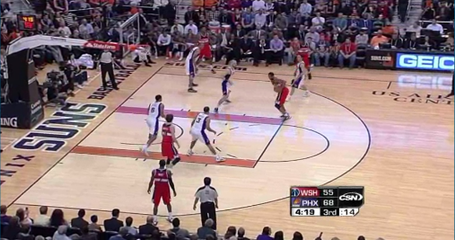 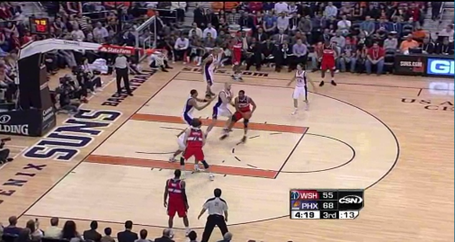 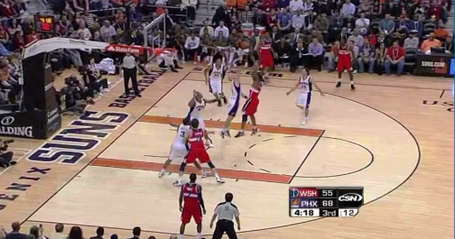 You could also argue Booker's own inability to hit a perimeter shot hurts here, since he had a pretty open look initially. You'd be right.

This was written off as another turnover for Wall, but again, what would you have him do here? As he comes off a pick set by Booker, Kevin Seraphin, for some reason, is right in his lane. 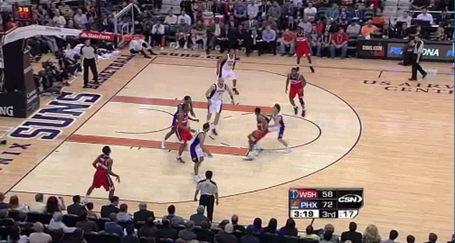 Lots of things are happening here. For one, Wall can't take a shot because Seraphin is in his way. For another, a pass to Booker solves very little because Booker's own inability to shoot a three allows Gortat to cover two people. Finally, Young should probably cut backdoor from the left corner, but he doesn't. That leaves Wall with only one pass, and Grant Hill sees it coming and easily picks it off. 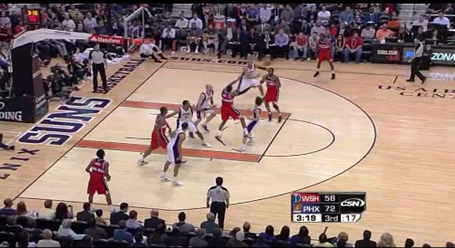 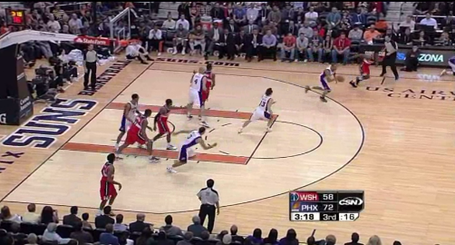 Having shooters makes everything so much easier for everyone. If the Wizards want to fix their offense, Ernie Grunfeld or whoever is in charge this summer simply has to find many of them.