Share All sharing options for: Wizards Vs. Suns Preview: Meet Steve Nash And The Randomly Rising And Sinking Suns

The Phoenix Suns are an interesting case. Despite the #FreeNash movement embraced by the national media, the Suns have taken the polar opposite approach to rebuilding, retaining franchise PG Steve Nash, The Small-Market Saint. The Suns can lose to and beat anybody. They win more often than the Wizards do ... just not that much more often.

Want a closer look? Stare into the Suns with me...

Are they good in general? Last night's gut check to Kobe Bryant and Co. snapped a four game losing streak, improving the record to 13-19. So you could say they're the Timberwolves without much of a future. But that's unfair, because this team has quality reserves forced into starting roles and a good-to-great Center. Toss in an All-Star or two to help on the wings and they'd be right in the thick of the chase. So no, they're not very good. Even if Alvin Gentry chooses to mention the playoffs.

Are they good against the Wizards? The teams haven't played each other this season, but the Suns usually hold serve on their home court. If Channing Frye goes off again, I'm going to drive my car off an overpass. Via offramp, having used my turn signal in a safe and legal fashion. But I'll be emo inside.

Are they fast or slow? Well...they're the Suns. Their pace factor sits above league average at a healthy 94.5, but the Suns have never been a team you run off the floor. Shannon Brown, Jared Dudley, Michael Redd, Markieff Morris and Channing Frye can all shoot the three in transition, and with Josh Childress showing signs of emerging from his post-Grecian chrysalis, Nick Young definitely won't be enough to stop any bleeding in the transition game on his own, not to mention Zombie Grant Hill. The Wizards must be better in this area, as Mike noted. The Suns' crowd is always great, and if fast-break buckets start falling, the arena noise will be beating against our team's mental toughness.

Are they especially good at anything? God save the King. It's Steve Nash and Marcin Gortat (who's been playing at an All-Star level) running the high pick and roll as well as any tandem in the league. Good luck to John Wall and JaVale McGee. This is as tough a test as any they'll face this season against a team looking to maintain positive momentum coming off an emotional win last night against the Lakers. Also, Markieff Morris is capable of carrying the team for short stretches while the starters are resting.

Are they especially bad at anything? Channing Frye is still launching four 3-point shots a game despite making only a bit better than one. It's the Suns, so their defense is surrendering assisted buckets and a true shooting percentage similar to the Wizards. This game is going to be all about winning matchups and making the hustle plays.

Are there any people involved with the organization that Derek really likes? I'm going to gloss over Markieff Morris (more on him in a moment) to mention Jared Dudley. A solid reserve on a playoff team, he makes threes at a respectable clip, plays solid defense, doesn't foul and makes his free throws (when he deigns to get to the line). This is kind of guy we love to overvalue. But if I could grab one guy...Marcin Gortat. I don't need to go into that, do I?

Are there any people involved with the organization that Derek really doesn't like? Channing Frye shoots threes and doesn't make them. What else does he do? Not much. His TS% has dipped every year in Phoenix and recently signed an Andray Blatche-like contract. Ouch.

Are there any players poised for a breakout? Gortat exploded last night, so let's look at Markieff. He's been getting some ink and is in the Rising Stars Challenge, so he's not an unknown. Even in a game like last night against L.A. where he shot 2-11 from the field, he carried the Suns in the second quarter, scoring 10 points and snagging six rebounds. Morris recently requested to come off the bench where he can be featured more prominently (starting while Nash and Gortat run the high pick and roll led to his production dropping off a cliff), and if he gets an opportunity against the Wizards, he will put the pedal to the metal.

Are there any players the Wizards especially need to worry about? Remember Grant Hill? I hope Jan Vesely is watching closely. The way Grant Hill makes his own opportunities by filling in the cracks defensively is exactly where we want to see Jan getting his points. Hill doesn't take the fast-break off, and if any of our guys get lazy in the transition game, Hill will make them pay.

And Steve Nash is pretty good. 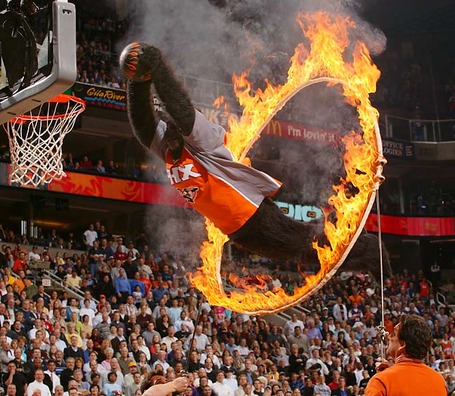 Any other random quirks: Expect to hear about when Gilbert Arenas was cut from Team USA and vowed to annihilate the Suns. He proceeded to drop 54 when the teams met next and we'll hear about what an explosion that was. Then, some variation of 'John Wall is a young man with a bright future ahead of him.' Then, the announcers will use the word aggressive or impatient, depending on John's shooting percentage thus far.