The Washington Wizards got blown out by the Utah Jazz because their transition defense was horrendous. Utah had 21 transition opportunities in the game, according to mySynergySports.com. That accounted for nearly 19 percent of their plays on Friday, and they scored 1.57 points per possession on those plays. On the season, 12.5 percent of the Jazz's plays are in transition, and they score 1.1 points per possession on them. Clearly, this was a huge problem on Friday.

Good transition defense is a combination of a lot of things. Some of it is scheme -- the best teams often purposely concede offensive rebound opportunities to get back. Some of it is mental toughness, because the most physically demanding portion of the game is in transition, and you have to be able to mentally fight through fatigue. Most of it, though, is simply having court sense and strong basketball IQ.

In watching the tape, there were lots of culprits, but one person that showed up often, to my dismay, was John Wall.

Here's one play from early in the game, when the Wizards were playing well. Chris Singleton took a stepback jumper that fell way short, and Gordon Hayward eventually got a dunk on the other end. 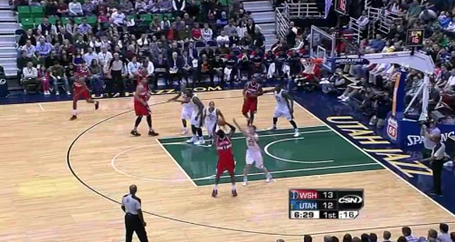 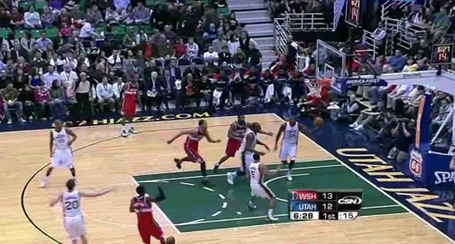 From these two screenshots, you have several problems. Both Trevor Booker and JaVale McGee are crashing the offensive glass, which is OK if there's a legitimate chance for an offensive rebound, but this shot was clearly going to be short. Singleton himself stood there admiring his shot as Hayward snuck behind him. But look at Wall in the right corner. He has absolutely no reason to be standing there. He's not crashing the offensive glass, so what's he doing? Watching the show?

What he should be doing is helping Nick Young stop the Jazz in transition. Instead, he allows Raja Bell to leak out and create an advantage. 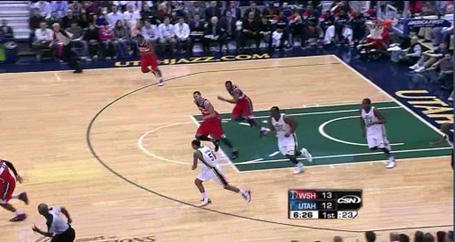 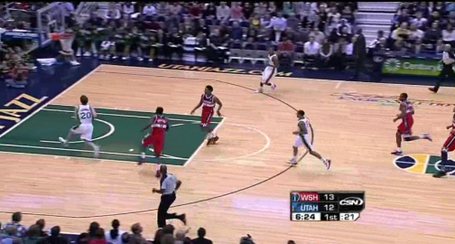 With Bell leaking out and Singleton too slow, Young has to guard two people. He shades too far to Bell on the wing, giving Devin Harris the passing lane he needs to find Hayward for the dunk.

Here's another play from late in the second quarter, a pivotal time because the Wizards needed to keep the game close going into halftime. The Wizards run a nice play to free up Young for the jumper, but look at the floor imbalance. 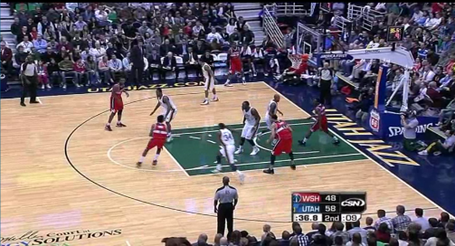 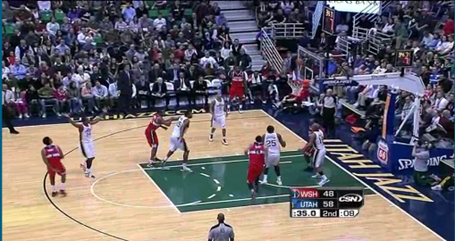 You have Jordan Crawford underneath the hoop for some reason, McGee going for the offensive rebound as you'd expect and Booker, who should be dropping back, sort of watching the ball. But you also have Wall in the deep corner, and as soon as that shot goes up, he needs to drift away from there and up onto the wing. Instead, the ball is in flight, and Wall is just standing there.

Eventually, Harris grabs the rebound, fires a nice outlet to Bell, and the Jazz are in business with three Wizards, including guards Wall and Crawford, trailing the play. 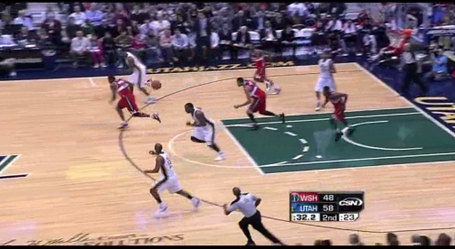 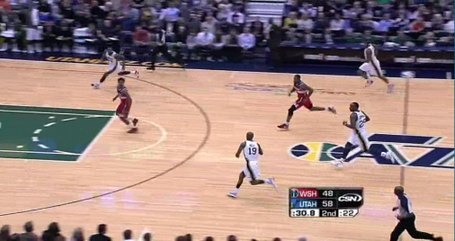 There's four Jazz players across halfcourt, and only Young, who took the shot and retreated as he should have, and a sprinting Booker for the Wizards. Bell forces the issue, then dumps to a trailing Derrick Favors for a dunk and a huge momentum swing at the end of the half. 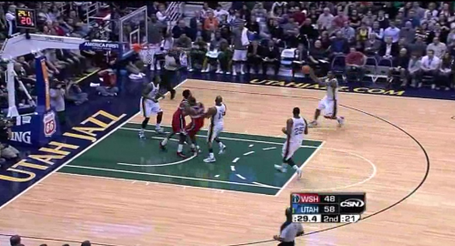 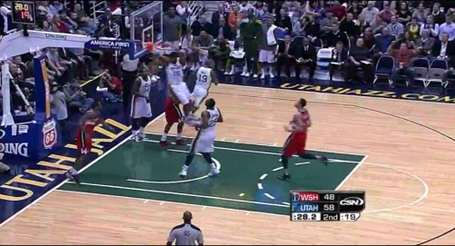 There were other instances of poor transition defense by other players on the team, so I don't want to single out Wall. But Wall is the superstar of the team, and how he sacrifices sets a culture. He's doing a good job in some areas such as taking charges, but he needs to dramatically improve his transition defense soon, because these are really bad habits to pick up.