I'm running through MySynergySports.com video now while working on a post for sometime to demonstrate some of the things Jan Vesely does well, and I came across this play the Wizards ran last night against the Blazers that merits a quick look, mostly because it involves a lot of things the Wizards haven't done offensively all year.

The situation: the Wizards have the ball late in the second quarter up by six points. 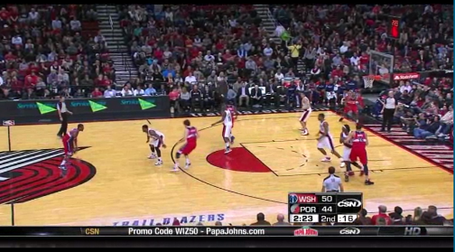 As you can see here, the Blazers seem a bit confused, with some players (Jamal Crawford) playing a man-to-man defense and others (Nicolas Batum) looking like they're in a zone. Marcus Camby is somewhere in between, since he's is way behind Jan Vesely as he sets a high ball screen for John Wall. But pay attention to the two players on the baseline: JaVale McGee and Nick Young. 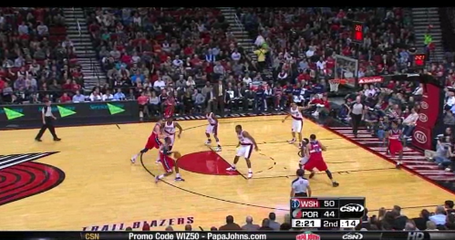 Wall seemingly is coming off looking for his shot, but as that's happening, the Wizards have another play really being run. Young starts running the baseline, and Batum, thinking the Blazers are still in a zone, points to Gerald Wallace to pick up Young.

Wallace tries to pick up Young, but here's where McGee comes in. We get on McGee a ton, and rightfully so, for not setting good screens. On this play, he sets a beautiful back-screen on Wallace to free Young up for a wide-open corner jumper. 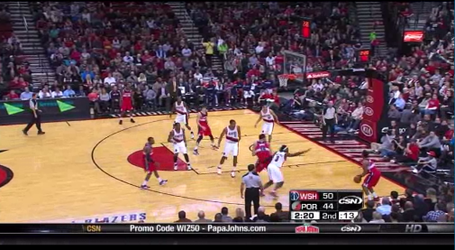 This was a pretty critical play for a couple reasons. First, Young had only six points at this time, and this open look certainly helped give him confidence to keep knocking shots down. Second, the Wizards, like many young teams, often close quarters poorly against veteran squads, and they had already seen a double-digit lead cut down to six. This play helped keep the Blazers at bay early on and helped spurred an 8-2 run to close the first half.