Share All sharing options for: Heat Vs. Wizards Preview: Meet LeBron James And The Evil Empire

This should be fun.

Are they good in general?: Sadly, yes.

Are they good against the Wizards? They haven't played the Wizards this season, but last year, there was this game with this moment that was pretty awesome.

Are they fast or slow? The Heat made a big stink during the offseason about wanting to push the pace, with coach Erik Spoelstra visiting Oregon football coach Chip Kelly to learn more about his spread offense. How a basketball coach feels like he can find inspiration in a football coach is beyond me, but for what it's worth, the Heat are playing at a much higher pace (95.1 possessions per game this year as opposed to 92.9 last year).

Are they especially good at anything? The Heat have the league's best offense, the highest effective field goal percentage, one of the league highest free-throw rates and they run like crazy. As much as we all hate LeBron James, he's having arguably his best season as a pro. Want me to go on?

Are they especially bad at anything? They haven't been great defending the three-point line, as Sebastian Pruiti spelled out here. Unfortunately, the Wizards have very few three-point shooters.

Are there any people involved with the organization that Mike really likes? Shane Battier and Udonis Haslem are two really solid veterans that any good team needs to have.

Are there any people involved with the organization that Mike really doesn't like? Well...

After all these years I still love DC! Always show me so much Love back

Are there any players poised for a breakout? Norris Cole played really well early but has tailed off recently. I guess he qualifies.

Are there any players the Wizards especially need to worry about? The Wizards need to do what teams always do to them: build a wall in transition, coordinate perfectly to prevent the Heat from getting to the rim and make them win with their half-court offense.

Is their mascot cool? What is this? 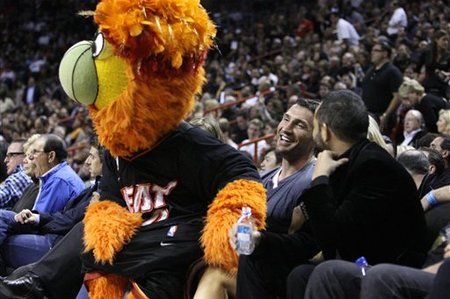 Any other random quirks: Going to be great when the crowd is full of bandwagon Heat fans, if by "great," I mean "awful."