Share All sharing options for: Wizards Vs. Magic Preview: Meet Dwight Howard And His Reeling Mates

All hell will break loose in Orlando if the Washington Wizards beat the Magic. God, I hope all hell breaks loose.

Are they good in general?: They were for about 15 games. In the last six games, though, they have five losses. Three of those losses were in games where they didn't score 70 points. One of those losses was when they blew a 27-point lead. Three came by double digits.

Are they good against the Wizards? Sadly, yes. The Magic topped the Wizards, 105-83, in one of the most lopsided games of the NBA season on January 4. The Wizards didn't ever come close to competing in the game.

Are they fast or slow? The Magic are very slow and methodical, at 28th in pace coming into this game. Considering their offensive issues, they might want to think about running more, but they don't.

Are they especially good at anything? This is still a very good defensive team.

Are they especially bad at anything? This stat from Evan Dunlap at SB Nation's Magic blog Orlando Pinstriped Post says it all.

MLK Jr. Day was two and a half weeks ago.

Are there any people involved with the organization that Mike really likes? Ryan Anderson is really streaky, but is really good when he gets going.

Are there any people involved with the organization that Mike really doesn't like? Can't stand Hedo Turkoglu.

Are there any players poised for a breakout? No.

Are there any players the Wizards especially need to worry about? It's all about Howard. Orlando doesn't do anything complex, which is one reason why they can't score. When you combine a lack of talent with a stagnant gameplan (and I don't blame Stan Van Gundy for this, for the record, because there's only so much a coach can do), you become easy to stop. Thing is, the Wizards need to actually go out and do it. The scouting report should be pretty simple, but if the players don't pay attention, even simple plays will beat them.

Is their mascot cool? Stuff! 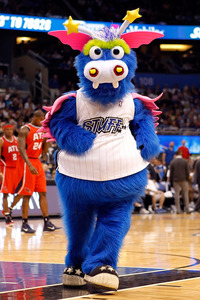 Any other random quirks: Larry Hughes actually sometimes plays for them!