Washington Wizards year in review: May

Ted Leonsis raises the bar and the draft lottery happens.

Share All sharing options for: Washington Wizards year in review: May

Our month-by-month look back at the Wizards' 2012 through the words of the Bullets Forever community continues with May. This month: the Wizards get the No. 3 pick, and #QUOTESANITY happens

The Wizards concluded a season of rebuilding - post an NBA lockout. We were as advertised - except - we started to show our upside in the last month of the season; post trade for Nene. We won our last 6 games in a row. We finished with 20 wins; in a shortened season; there were 11 other teams that finished the season with 20 odd wins too; our stats that measure progress on key metrics - in terms of rebounding; defense play - improved dramatically. We have the youngest team in the NBA. We are selling lots of new tickets - we are renewing at a very high pace our season ticket holder base. We will have a high pick in the upcoming draft - and we have cap space to sign a free agent this off season. We have, as discussed, upside. We were bad - by plan - and now we plan to be GOOD.

It's reasonable to assume that when Ted looks to next season, he looks for comparable progress from the 2011 draft class. If Jan Vesely, Chris Singleton and even Shelvin Mackfollow suit, the Wizards will be a fringe playoff team. Should Nene remain healthy, that could very well be where they are now. But don't kid yourself; when Ted Leonsis says 'we plan to be GOOD', it's not a promise. It's an expectation, and all that that implies.

The Wizards would be a foolish organization if they did not at least do their due diligence and explore signing Van Gundy if he becomes available. Since they are not foolish, I assume they will at least be mentioned in the conversation once he officially becomes a coaching free agent.

The Wizards enter with the second-best odds. They have a chance at the top pick! 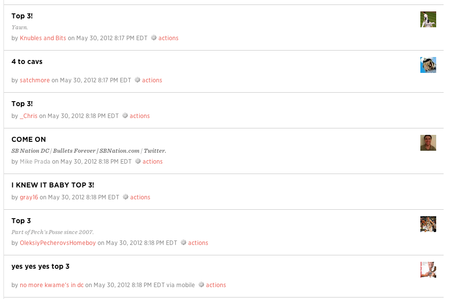 But ... they end up picking third. 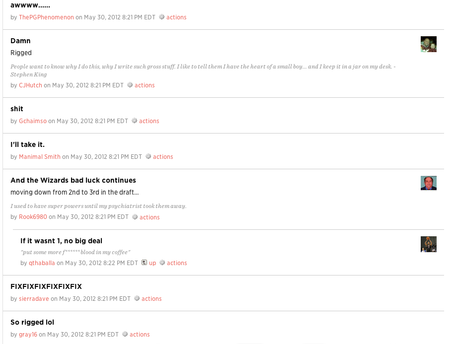 It could have been worse.

The Wizards are now in a really interesting spot. They have the choice of a number of second-tier prospects that many of us seem to like, but they have to figure out which one fits best, not to mention which one is available. Is Michael Kidd-Gilchrist's will to win worth the third pick despite his poor shooting? Is Bradley Beal the guy even though he was underwhelming at times at Florida? Should more consideration be given to Thomas Robinson, who produces and plays his ass off, but also plays the same position as Trevor Booker and Jan Vesely? What about a wild card like Harrison Barnes or Andre Drummond? Is a trade down or even a trade out worth looking at?

But a clear early favorite emerges: 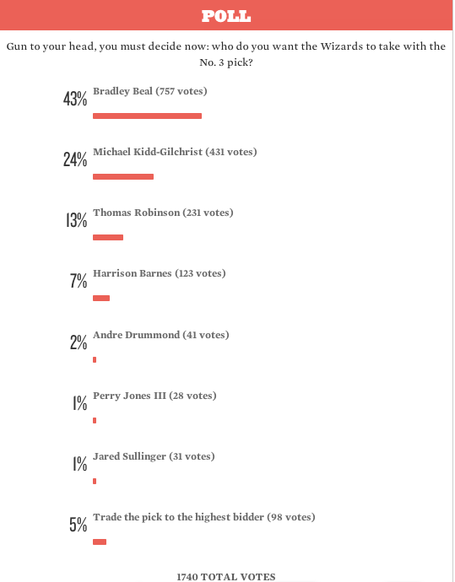