The Wizards go on a season-ending winning streak, but optimism fades when Ernie Grunfeld is retained.

Our month-by-month look back at the Wizards' 2012 through the words of the Bullets Forever community continues with April. This month: the optimism of a late-season winning streak is killed by the return of Ernie Grunfeld.

The Wizards keep chugging along, playing better with Nene, but still struggling. Then, Nene sits out with nagging injuries, setting up the Wizards for an uneventful finish to the year. But things did not go quite as planned.

Here's Crawford after a loss to the Bucks:

He also delivered one of the quotes of the year after a win over the Magic. 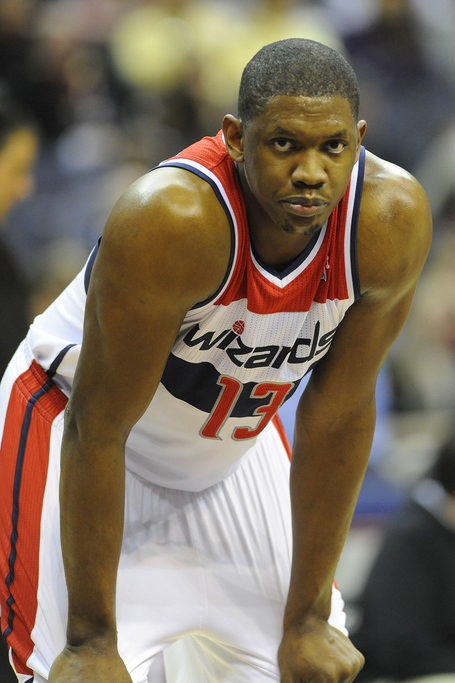 The young big man balled out in April. Here's jkhan15's take after watching some film:

The great part about his hook shot is how comfortable he looks setting up the defense and shooting. It feels like Dwight Howard has been working on his post game for a decade, but his hook shot still looks stiff and sometimes ends up as a line drive. Seraphin, on the other hand, looks like a natural at only 22 years old. Over the past week, Seraphin has done a great job of backing down his defender, feeling which way the defender is leaning and spinning the opposite direction for his hook.

This was not a good April for Wall, at least not until the very end. A sampling of quotes from pieces this month:

After a poor performance against the Pacers:

His play in this one was especially curious. Early on, he didn't even look to shoot, passing out of several easy opportunities and shirking responsibility to make plays when things broke down. Then, in the third quarter, he decided to flip the switch and attack all the time, with mixed results.

After a blowout loss to the Knicks:

Over his past 13 games, Wall is just 6-50 from 16-23 feet. That improved jumper we saw in February? Completely gone, along with any confidence in his abilities. I'm not sure how Wall can go from a nice stretch in February to a horrid stretch like this, but it's happened. His shooting motion is inconsistent, he doesn't follow through, he's not fluid and he jump-passes because he seems scared to shoot. That shot is going to need a lot of work this summer. Throw in some turnovers not caused by his shot, and he's in enough of a funk where I'm concerned about his long-term future. At a certain point, it goes beyond the factors that are beyond his control.

But this was just a step back, not a death sentence:

All this is to say that the book on John Wall isn't even close to being written. He's just experienced a roadblock that a lot of young talents experience. It's on him now to adjust.

And at least Wall seemed to identify the problem:

Just when it looked like Crawford's prediction would be silly, the Wizards started winning. They couldn't stop until the season stopped for them. The wins:

What should the winning streak have meant? From DCrez:

IMO, this little run is terrific and presents and much needed double-edged sword. No more excuses next season, none. If the teams comes out of the gates 4-20 next season wholesale changes MUST be made and Ted can spin it no other way. Either what we are seeing is the progress we want or it isn't. There will be no more "but when [insert player] gets a J next season it's on!"

Wall, though, seemed much happier:

"This year, really, after the trade, it felt like it was my third year," Wall said. "It was a whole totally different team and we started playing totally different, to be honest. No disrespect to any guys we had before, but everything changed. We were more serious in the locker room, more serious on the court, unselfish play, everybody played together and just wanted to win."

BUT ALL IS NOT WELL, BECAUSE ERNIE GRUNFELD IS BACK

Worse, the Wizards didn't consider other candidates for the job. This was strange:

Saving that, the decision to do this now seems odd on the surface. I don't see the harm in at least talking to other people. While there is value is having a general manager for the draft process, that process doesn't intensify until May and June. Why not at least consider other options before making a decision? It's not like Leonsis had to hire the other candidates.

I'm really disappointed that Ted didn't even do his due diligence

He said as much that he doesn't know much basketball, so what is wrong with listening to other candidates and their assesment of our situation and then to what their approaches would be going forward.

Even if you end up re-signing Ernie, it's always a good idea to hear some fresh perspectives.

Welcome to the rebuild bandwagon.Take any empty seat. Or five. And fasten your seatbelt. There's going to be a lot of turbulence. - Yop32

A well-argued FanPost that concurred:

When looking at a franchise, I usually compare it to a building. The GM is the architect, the staff is the infrastructure and the players are the walls. The reason I like this comparison is because it shows just how everything is connected. A winning franchise needs good management and a good staff to go along with good players: it's called being a good organization. If one of those criteria isn't met, you'll usually have a hard time getting a team together that is consistently good over the long haul.

This is why Grunfeld's extension scares me.

You see, while Ernie has done a fair job amassing young talent and some quality veterans, he has miserably failed to put together a good organisation.

Ted Leonsis clearly stated that Ernie will be evaluated based on what he's done since Ted took over as owner. The shrewd trades he's executed (namely the Hinrich deal in which he played the cap situation), the way he has changed the culture of the team by bringing in high motor big men (remember when that was such a problem?), and the way he has set us up for the future has been rather impressive.