A shocking trade-deadline deal changes the course of the franchise.

Our month-by-month look back at the Wizards' 2012 through the words of the Bullets Forever community continues with March. This month: a critical trade changes the entire course of the franchise. But first...

JAVALE GETS BENCHED, FANS GET TIRED

This was the last straw in the JaVale era. Here's how he reacted to a benching.

And cuppettcj gets fed up with those who defend McGee.

We should ask GMs of lottery-bound teams from around the league to trade us their 1st round unprotected pick for McGee straight up. After all, why would they need a 1st round pick when they can get the extremely talented, always improving McGee? Why would they need Anthony Davis when they can get someone even bigger, even better, with more athleticism, and who is much closer to dominating the league? I mean, McGee is probably only a season or two away from dominating the NBA, and he's a sure thing, so why take a bigger risk with someone in this draft?

Which is why it became clear that it was time to deal him:

Perhaps JaVale McGee really is the victim of several years of a horrendous culture. Perhaps JaVale McGee really is the one that gets away and makes the Washington Wizards pay several years down the road like predecessors Chris Webber, Rasheed Wallace and Rip Hamilton. But those are fears of the great unknown, and they say way more about things that have little to do with McGee than with McGee himself.

In the here and the now, the reality is this: the Wizards are creeping up on a day where they must start to view McGee as a certainty instead of a project, and McGee's demonstrated very little hope that he can be a certainty.

THE BOOS GET TO ANDRAY BLATCHE

After a 20-point home loss to the Warriors, Blatche finally vents his feelings about being booed by his own fans:

"It's tough when you're at home and people that are supposed to have your back don't have your back," he said. "Instead of encouraging you to get better, they actually push you down and make you worse. In the long run, it's not only hurting me, it's hurting my teammates."

These comments were debated heavily. Count cuppettcj on Team Blatche:

Wouldn't it be great if Blatche could just tune out the boos and play a good game regardless? Sure. It would also be great if he could put up 20 and 10 every game like he did in the second half of the 2009-10 season. But that's not going to happen. Blatche is who Blatche is. He needs confidence to play at his best. The so-called "fans" that boo are deliberately sabotaging the man's confidence and ensuring that the Wizards get very little, if anything, in return for Blatche. They are in essence sabotaging the team. I dislike Blatche as much as anybody, but this disgusts me!

Meanwhile, GJennings provides the opposite view:

Btw, coddling AB didn't exactly work out for the Wizards? For six years, he's enjoyed quite a bit of applause. He's enjoyed Flip Saunder's lack of accountability. Sometimes criticism from others can be helpful. Sometimes it can spark greater self-awareness and a desire to improve oneself. I'm not willing to assume that he can't pull himself out of this. If he plays well on the road, shows commitment to defense, and avoids any more legal mistakes, Wizards fans will welcome him back. The problem is AB has to earn back the fan's respects. He's part of the "entitlement" culture the Wizards have.

More generally, there were calls for the Wizards to add veterans. Here's Dutch Hoopfan:

There is talent on this roster, there really is.

However, Ernie has managed to find ZERO serviceable veterans that can contribute. The coaching staff seems to have no clue how to develop talent whatsoever and lacks a leader who carve's out clearly defined tasks and responsibilities for everyone. On top of that the FO doesn't hire much needed player personell to help these kids adjust to a new life as a millionaire in a new city. The basketball operation has made a very ugly piece of art out of otherwise fine, but raw materials.

"We always knew he could score if he took his time, but we knew thing kind of game fit him best because they were letting us play physical. He's a physical guy, and playing against [Andrew] Bynum and those guys, he was able to play like he wanted to. Him and Book did a good job on the boards."

!! RT @kevin_seraphin: No body will punk a player of the Washington wizards! #RealTalk 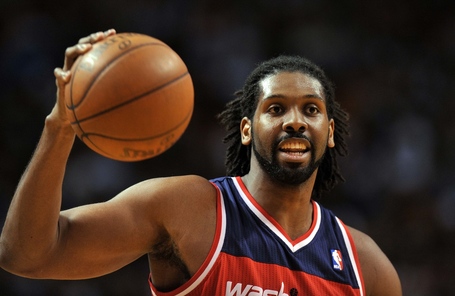 The Washington Wizards have acquired Nene, Brian Cook, a first-round pick and a second-round pick in a three-team deal with the Denver Nuggets and Los Angeles Clippers for Nick Young and JaVale McGee, according to Adrian Wojnarowski of Yahoo! Sports.

What is the plan?

What is EG trying to build here? This move just seems really desperate with idea of keeping his job #1 priority. Why do this trade? JaVale isn't great or anything, but he gave solid production, and was still improving. Nene is reached his ceiling, and while being healthy the last few years (excluding this year), I bet he has a bunch of wear-&-tear due to past injuries. And while he's been a good player the last 3 years, he's having a down year this year playing w/ injuries. And this move hamstrings our cap flexiblity for the next 4 years, and I don't think Nene is worth his contract.

If we were going to abandon this rebuilding plan, I would've traded for a player like Dwight Howard (even though is wasn't possible), or someone who's worth all their contract. We traded young for old, and we're far from ready to compete.

Why would the Nuggets trade Nene if there is something going on that we don't know? Why would they already have buyer's remorse? Shouldn't that be a bit of a red flag?

BNIE was quickly won over:

The Ten Point Plan opts for volume over precision when it comes to young players and pruning was both necessary and inevitable. Nene is the definition of a veteran with a complementary skill set. A high character guy who never would have signed in DC for young players who didn't come together to form the core Ted envisioned must have sounded like a win/win, save one detail.

"It was crazy. It was tough," he said earlier. "I don't like to mention much because I still have no clue what happened. I trust my Lord, I trust my God. He put me here, and I know when He traded me to somewhere [like this], it's for better things."