John Wall's struggles rise to the forefront of the discussion and the Wizards' rebuild keeps rolling along.

Our month-by-month look back at the Wizards' 2012 through the words of the Bullets Forever community continues with February. Februrary: where the rebuild continues.

A few years into the rebuild we're still sailing in the fog without a compass, map and occasionally minus a rudder. That causes a problem that may not be readily apparent. If we can't calibrate our expectations as fans, how can we measure progress? If we can't measure progress, how can we justify all the losing to ourselves? So how do we balance our fandom and our expectations? 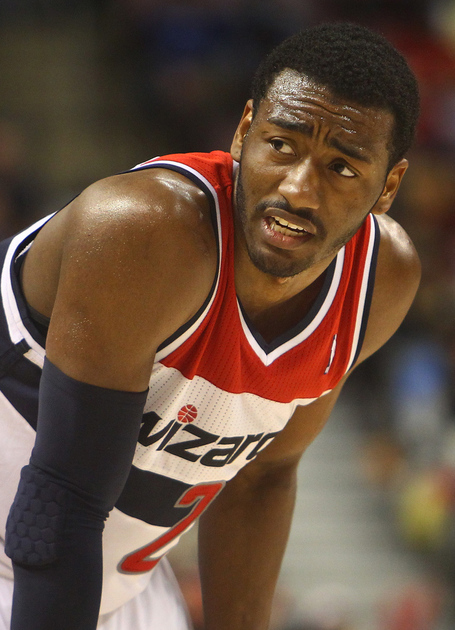 Without a drink to stir, Wall is struggling. If the NBA is footballizing, Wall is like that quarterback forced to deal with a leaky offensive line and no playmakers. The uncertainty of the roles of Wall's supporting cast is making Wall uncertain, and that makes nobody better.

That kick-started this project to determine the answer.

Also, his jump shot stops falling, and maybe it's because of his follow through.

And he also did this:

JEREMY LIN SLICES UP THE WIZARDS

This was at the height of Linsanity, and it was especially embarrassing because he looked much more poised than John Wall. It wasn't Wall's fault, because he had 29 points.

Wall had 29 points and one turnover in the entire game. Wall was not the reason the Wizards lost. In fact, without Wall, they probably lose by 30. The Wizards' pick and roll coverage was awful, and the big men were mostly to blame. Lin can certainly change speeds beautifully, but the Wizards' big men never were able to prevent him from getting inside the free-throw line extended. Proper pick and roll coverage involves Wall pressuring the ball, the big man stepping out and beating the guard to the spot and Wall recovering quickly, in that order. The second part of the chain kept breaking down, and that is why the Wizards lost.

But that didn't stop the narrative.

"He told me [Cornell] did a much better job than we did guarding him tonight."

And a GIF party was had by all.

Also, some people start to get excited about Randy Wittman. Here's a FanPost from SpecialSauce.

I know the Wizards are going to lose a lot of games this season, but if Wittman continues to stick to playing 10 guys a night, giving the young guys some much needed experience, and use their best abilities to the team's advantage (like running), I'll be okay with the direction of the team this season, despite the likely losses piling up.

JOHN WALL IS PICKED 12TH IN THE RISING STARS DRAFT

Behind such luminaries as Derrick Williams and MarShon Brooks. Wall's response: