How the Wizards fell apart in overtime vs. the Atlanta Hawks

Many Wizards played well in their tough loss to the Hawks, but they also blew crucial opportunities during crunch time.

Share All sharing options for: How the Wizards fell apart in overtime vs. the Atlanta Hawks

Thanks to strong performances from Jordan Crawford, Bradley Beal, and Earl Barron, the Wizards played the Atlanta Hawks tough. But they still lost. To balance out the ever-positive Amin Vafa, let's take a look at a couple overtime possessions where the Wizards missed out on crucial points.

Down by three with 90 seconds left in overtime, the Wizards run a pick-and-roll on one side of the floor while Bradley Beal uses a couple screens on the other side of the floor to get an open look at a three. Jordan Crawford never gets to make the pass to Beal because Al Horford does a great job hedging on the screen. 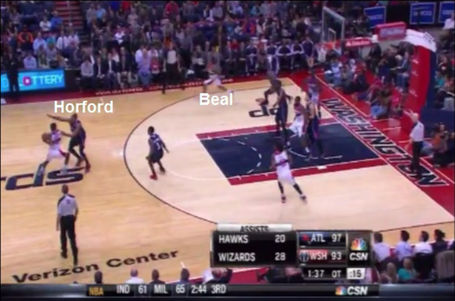 But because Horford has extended so far, the Wizards have a numbers advantage on right side of the floor. Crawford passes to Nene, but the Wizards can’t capitalize because Martell Webster is caught in no man’s land. If Webster stays near the basket, Nene doesn’t have much of a passing angle to find him. The best passing angle is in the corner, but Webster can’t get all the way to the three-point line in time. So not only does he end up shooting a long two, but that shot ends up getting blocked by Horford.

Credit Al Horford for making two great plays, but the Wizards spacing was shaky once the pass to Beal was denied.

The Wizards still had a chance to tie with 24 seconds remaining, but personnel issues may have stood in the way. As commentators will often tell you, the most dangerous man on the floor is the inbounder, and the Wizards tried to use this to their advantage.

After the ball is inbounded to Nene, Earl Barron sets a screen for the inbounder, Martell Webster. Here’s where the Wizards could have taken advantage of the Hawks defense. Jeff Teague calls for a switch (Atlanta appears to be switching on perimeter screens), but Kyle Korver doesn’t get the message. Both of them end up guarding Webster, which means someone is open. Unfortunately, that person is Earl Barron, and he’s standing 25 feet away from the basket. It would be pointless for Nene to make that pass. 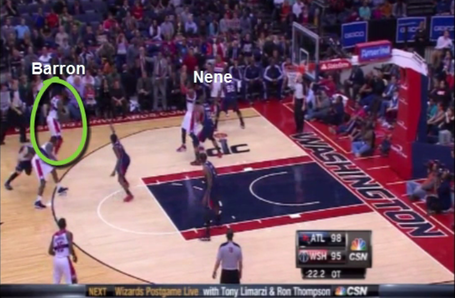 Earl Barron was having a productive night, but he wasn’t going to be a factor on this play. Having an actual shooter here would have been great. And if subbing him out isn’t an option (since he may be needed for the ensuing defensive possession), it would have been wiser to draw up a play that kept him near the basket.