Wizards vs. Lakers: A close first half, but L.A. pulls away down the stretch

The Wizards and Lakers battled through a close first half, but Kobe Bryant and L.A. pulled away in the third quarter and never looked back.

Share All sharing options for: Wizards vs. Lakers: A close first half, but L.A. pulls away down the stretch

The Wizards started hot and looked great for most of the first half, but the Lakers came out and dominated the third quarter, and that was pretty much the difference Friday night.

For L.A., Kobe had a horrendous game numbers-wise (9-29 shooting for 30 points), but he got to the line, and more importantly, he was able to attack whenever the Lakers needed a spark on offense. Kind of like what Jordan Crawford does for the Wizards when the offense breaks down, except Kobe Bryant is Kobe Bryant, not Jordan Crawford. Anyway, the Lakers were +17 with Kobe on the court.

The Wizards defense strugged to keep up with L.A for most of the night (the Lakers shot 46 percent), but it was actually the Wizards' atrocious offense in the third quarter (14 points in 12 minutes...) that allowed L.A. to take control for good. The entire team went cold, and after that awesome first half where we were able to say, "Hey, the Wizards are just as good and/or bad as the Lakers!" the third quarter was a reminder that nope, we are actually a little bit worse than the Lakers. Which isn't to say there were no bright spots.

For one thing, seeing just how incredibly the Lakers are really did make me feel better about the Wizards. It's not just us! And the game was actually fun throughout, with more energy in Verizon Center than we've seen since Miami.

He was 5-17 with just 11 points, but he was still entertaining throughout, and like we said above, he's the only guy on the team who attacks constantly.

After one made jumper in the first half, Adam McGinnis from Truth About It said, "That's a shot where if it doesn't go in, I would be so pissed off." NOTE: That can be said for pretty much every shot Jordan Crawford has ever taken. And that's why he's the greatest! He may not always succeed, but goddamnit, it's always fun watching him try. 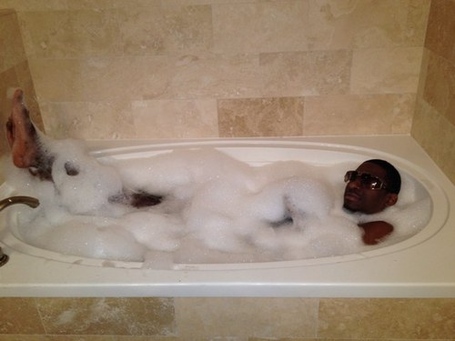 So that's where we are. It's another loss, but the Wizards made it interesting--even if that says a lot more about the Lakers' dysfunction than anything the Wizards might have done--and at this point, that's good enough for me to go home happy. Alright, we end with a few questions.

And that's it. Vent below, and have an awesome weekend.