Randy Wittman called upon Martell Webster to take the potential game-winner vs Boston, but the veteran came up short.

After battling back from an early deficit, the Washington Wizards fell to the Boston Celtics, 89-86, after missing a game-tying attempt at the buzzer. Let’s take a look at what went wrong for the Wizards with four seconds left and why they got such a bad shot.

The play starts with Jannero Pargo getting a screen from Kevin Seraphin and then curling to the far corner off of a second screen from Trevor Booker. The Celtics don’t seem threatened by this action, and rightfully so. Pargo isn’t very dangerous running away from the basket, and making a cross-court pass to the far corner would give the defense plenty of time to recover. Plus, the first action in a late-game situation is usually some kind of decoy for the defense. 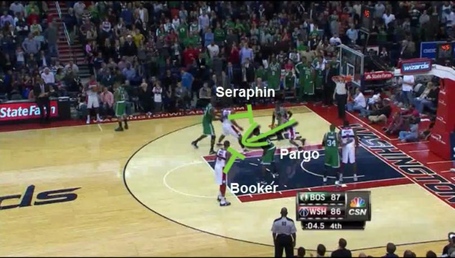 After Booker sets his screen for Pargo, Martell Webster sets a back screen for Booker to roll to the basket. Here’s where we see the Celtics’ preparation and communication take shape. Boston didn’t switch any of the previous screens for Pargo, but with Booker potentially getting an alley-oop, Paul Pierce switches assignments and covers Booker. 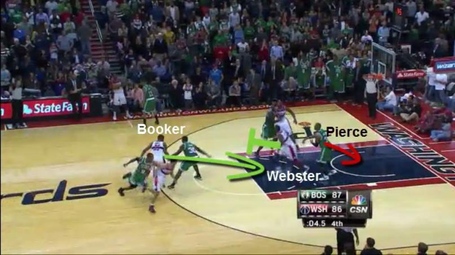 Next, Webster gets a screen from Seraphin, and we see Kevin Garnett switch onto Webster. 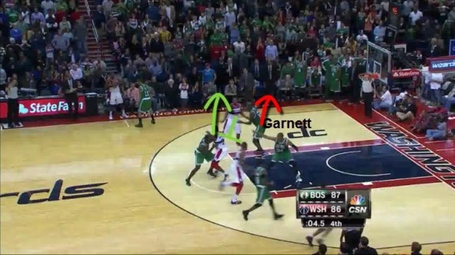 At this point, there’s not much left to do. The alley-oop to Booker was covered, and a five-second violation is looming. Webster in the corner is the only remaining option. The full play is below:

Although Randy Wittman believed that Webster could have attacked the basket, the design of the play has Webster running into the corner with all of his momentum going out of bounds. I have my doubts as to whether Webster could have realistically turned the corner while fighting against his own momentum and Kevin Garnett's defense. Webster felt he was in a dangerous spot, so taking a bad shot is better than getting trapped in the corner.

What are your thoughts on the final play? Considering the amount of time left, would you have liked to see the ball in Kevin Seraphin’s hands again (despite his costly late-game turnover) or maybe Jordan Crawford's?