Breaking down the defensive possession that helped seal the Washington Wizards' first win of the season.

WASHINGTON -- The Washington Wizards had been in this position before. They were up by a basket with under a minute left against the Portland Trail Blazers, and they needed one more stop to preserve their lead.

When this happened against the Atlanta Hawks and Charlotte Bobcats last week, the Wizards never got that stop. Now, with the possibility of an 0-13 record and a 15-point collapse hanging over their heads, they needed to come through.

In the huddle, coach Randy Wittman had some inclination of what the Blazers would do. With 39 seconds left, the Blazers were going to try to work quickly to preserve a two for one situation. That meant going to their superstar, LaMarcus Aldridge.

If Wittman had his way, the Blazers' play would involve Aldridge and only Aldridge. Wittman, fed up that his two slower big men in Nene and Emeka Okafor had failed to contain Aldridge in pick and roll situations during the fourth quarter, took out Okafor and put in Chris Singleton to guard Aldridge. Singleton was slight and could be punished in the post, but that's exactly what Wittman wanted.

"When they tried to take [Aldridge] into the post, I think it really helped us," Wittman said. "It eliminated [Damian] Lillard being involved."

Singleton's mobility made it more difficult for Terry Stotts to involve both Lillard and Aldridge in the play. So, with that cut off, Stotts ran a simple post-up for Aldridge. Now, it was up to Singleton to hold his own.

The first step was obvious: deny the pass and push Aldridge out. Singleton had fared well fighting Aldridge for position earlier in the game, and now, he had to do it again. As the Blazers ran a cross-screen to get Aldridge on the move, Singleton cheated over the top to beat Aldridge to his preferred spot on the block. 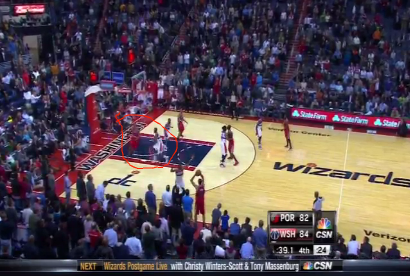 Singleton's fronting forced Aldridge to go further and further out to get in front of him for the post entry pass. Finally, Aldridge caught it near the three-point line. 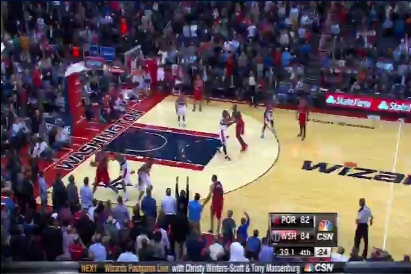 Now, it was up to Singleton to execute his defensive gameplan. The book on Aldridge is pretty simple: he tends to drive to his right, then turn back to his left to get his shots off. Singleton knew this better than anyone, so he just had to make sure to not let Aldridge beat him to the basket going right.

Aldridge started to get right, but Trevor Ariza made a great play, plugging the lane and preventing Aldridge from just running over Singleton. 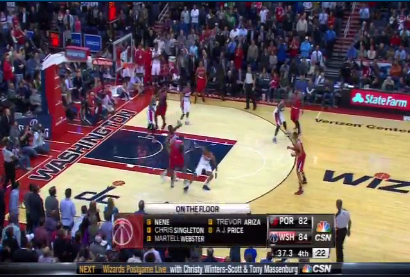 Aldridge could have passed, but Ariza recovered nicely to Batum to cut off that option. Instead, he tried to get back to the middle again. This time, Singleton was ready for it.

"Most of his drives are with his right hand. If he goes to his left hand, he's going to shoot a turnaround jump shot," Singelton said. "I was just trying to keep him out of the middle. He tried [to go middle], but he passed it out." 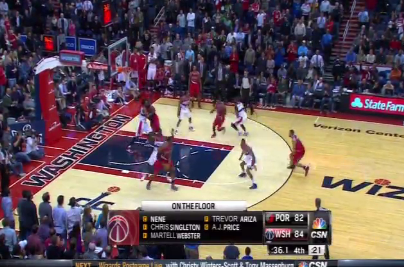 Aldridge eventually picked up his dribble with nowhere to go, and the best the Blazers could do was a fallaway three from Batum that air-balled.

It's rare that a coach wants the opposing team's superstar to isolate on a smaller defender in the post with the game on the line, but Wittman had a ton of faith that Singleton would come through. Singleton has been playing more power forward this year, and while he still gets overpowered by stronger big men, his speed is an asset in preventing those guys from killing the Wizards in pick and roll situations. You can always double or dig down in the post in late-game situations to account for mismatches. Wittman gambled that his team could do that if need be and they did.

And with that, the Wizards had their elusive first win.

Wizards vs. Blazers: Washington finally gets its first win