Who is in? Nene will play, says Randy Wittman. Trevor Booker will not. Also, the starting lineup will be the same as it was against the San Antonio Spurs.

John Wall? Some good news: John Wall is doing some basketball things again! OK, so all he's doing is resuming his normal 6 p.m. shooting routine with Sam Cassell, but it's something. Here's photographic proof! 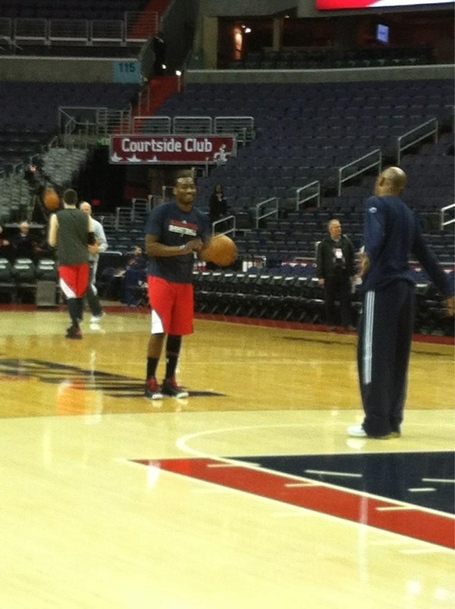 Wall still isn't returning to game action anytime soon, and Wittman said he hasn't even returned to a normal practice yet, but he looked pretty good in his brief shooting routine. Cassell had him working on one-dribble pull-ups, and Wall nailed almost all of his shots. He still has that funky inverted elbow thing going on with his shot, but his motion is much more fluid and he's reaching up to follow through rather than out. Temper expectations, because this was a VERY brief practice shooting session, but he looked pretty good.

"His rehab and the things he's able to do on the floor have increased, but it's not to the point where he's done everything with the team," Wittman said. "It's hard to say what the timetable is. Everybody focuses in on the 8-12 weeks or whatever it is, but you've got to do the things that are right for the individual."

Team meeting? Wittman denied that a meeting took place, as reported here and in several other places.

"A team meeting?" Wittman said. No. We had a film session."

Wittman later noted that both he and the players talked, but it was "nothing out of the ordinary with what we do at a lot of film sessions." It sounds to me like there was a team meeting.

Damian Lillard? Earlier today, jkhan15 broke down how the Wizards can slow down the Blazers' rookie point guard. Blazers coach Terry Stotts admitted that teams have started to focus on Lillard more due to his success starting the season. I asked Stotts how teams have defended Lillard differently.

"They try to get the ball out of his hands. They're being physical with him. Like I said, they make him work at the defensive end a little more," he said.

It all falls in line with what jkhan15 wrote. Meanwhile, Wittman would only say that the Wizards will give Lillard "different looks" tonight. Maybe they should show him a Lincoln Memorial keychain.

I like DC. I wana come back and visit the memorialseven though I'm scared of statues

Wizards vs. Blazers: Washington finally gets its first win