Washington Wizards play not to lose against the Charlotte Bobcats

Three plays where the Washington Wizards had a chance to seize momentum and instead sat back and did nothing.

Share All sharing options for: Washington Wizards play not to lose against the Charlotte Bobcats

There were many reasons why the Washington Wizards lost their 11th straight game to begin the 2012-13 season on Saturday night, but I want to focus on three possessions in the overtime periods because they demonstrate an especially problematic attitude that's infested this team right now. These are three plays where the Wizards have momentum or are given a set of extremely favorable conditions, and instead of taking charge, they sat back and hoped the clock would just tick down or the ball would end up in the basket on its own.

Here are the three plays.

1:42, OT1: Up 2, the Wizards force Ben Gordon to miss a floater outside the lane. Jordan Crawford grabs the rebound and has one man ahead of him, but doesn't bother advancing the ball quickly. Instead, he walks it up the left side of the floor and tells everyone to space out. Note the time on the shot clock when he does this. 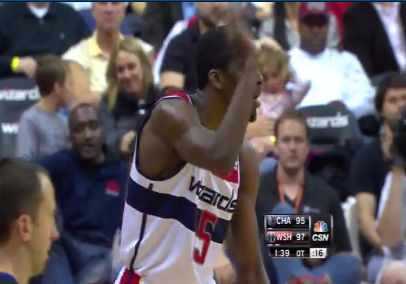 Now, note the time when he actually makes a move to do anything. 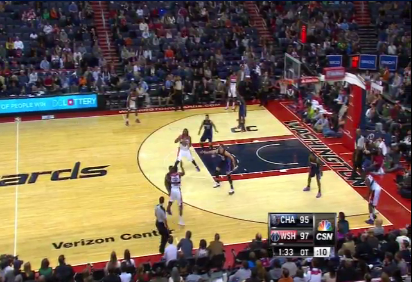 Six wasted seconds, right there. I understand the desire to kill some clock, but this was far too early to do so. Run a real set and get a look that isn't rushed with the shot clock winding down. Chris Singleton eventually missed a bank shot, and Ben Gordon responded with a three on the other end to give the Bobcats the lead.

2:24, 2OT: Here, the Wizards are up three and just got a rebound off a missed three by Byron Mullens. Bradley Beal advances the ball up the court and gives to Crawford at the top of the key. Note the time on the shot clock throughout these sequences. 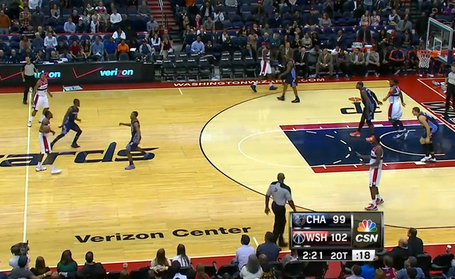 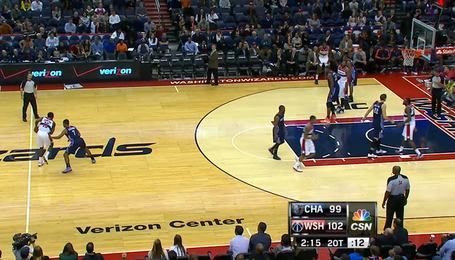 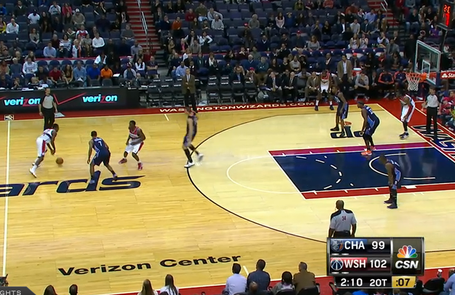 Only now does Chris Singleton come to set a screen. Eleven seconds have been wasted with Crawford doing nothing. The Wizards have a chance to make this a multiple-possession game, and they instead squeeze the shot clock hoping that it'll magically run out on them and they'll get a win. Singleton eventually gets a relatively open shot, but he misses it under pressure of the shot clock running out.

39 seconds, 2OT: This was obviously the clusterf*** of a possession where the Wizards got a shot-clock violation when they should have been able to get a quick score to preserve the 2 for 1. A lot went wrong on this play, but I want to focus on just one element of the play. Check out this screenshot. 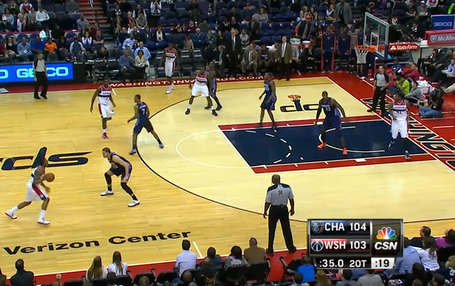 That's Beal with the ball with Mullens guarding him on a switch. That's a major mismatch, especially given Beal's crafty ability to get to the hoop when he wants to do so. A smart, confident player who wanted to get a win for his team would have waived Nene out of the post and cleared the entire side to make an aggressive move. Instead ... 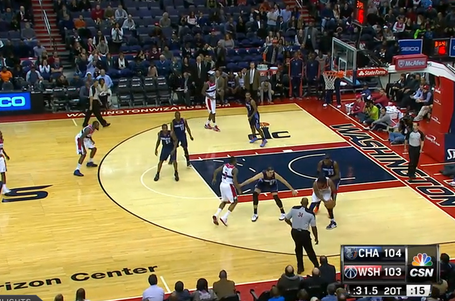 Beal dumped it into the post to Nene, with a traditional center guarding him, and cleared out to be as far away from the play as possible. That's not playing to win. That's playing not to lose.

Whatever caused these three possessions to happen needs to be fixed. Wins aren't just going to come up to this team and smack them in the face. They need to be taken. Every possession. Every play. It sounds cliche, but it's the reality of the situation.