Wizards vs. Hawks: Martell Webster was a tenth of a second short

Martell Webster's tip in was just after the buzzer, so the Wizards fell to 0-10.

Share All sharing options for: Wizards vs. Hawks: Martell Webster was a tenth of a second short

There are many reasons why the Washington Wizards lost in overtime to the Atlanta Hawks on Wednesday night. The two non-rebounds on missed free throws by Al Horford, for one. The inability to find Kyle Korver and stick like glue to him on the eventual game-winner, for another. The untimely poor offensive sets, for yet another. But none of that would have mattered if Martell Webster somehow got this shot off a tenth of a second sooner.

Here's what the play looked like before we saw the replay.

YAYYYYY, right? Welp, so much for that. As you can here, the buzzer sounded just before the ball left Webster's hands. Here's a screenshot for posterity. 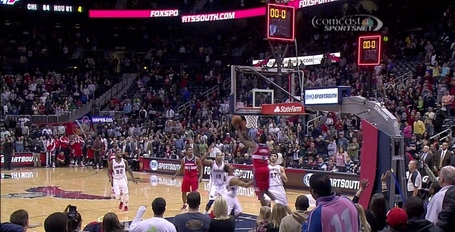 Randy Wittman tried to say after the game (via CSN's postgame show) that the Wizards had a replay that showed Webster had released the ball, but it's pretty clear in this shot that he didn't. Just like that, 0-10. Yikes.