The Wizards' quick-hitter misfires against the Pacers' defense

The Wizards needed a quick basket, but who would get the call as the late-game scorer: Bradley Beal, Jordan Crawford, or Kevin Seraphin?

Share All sharing options for: The Wizards' quick-hitter misfires against the Pacers' defense

With under a minute remaining and the Indiana Pacers leading by five points, the Wizards needed a quick basket to keep the game within one possession. Let's take a look at what Randy Wittman called and how the Wizards executed the play.

The first option on the play is a look for Bradley Beal coming along the baseline and using staggered screens from Jordan Crawford and Chris Singleton. From there, Beal could have taken a quick jumper or looked for the drive. However, David West switches onto Beal and denies the pass. (Sam Young also executes an awesome cut block on Singleton; Paul Johnson would be proud). 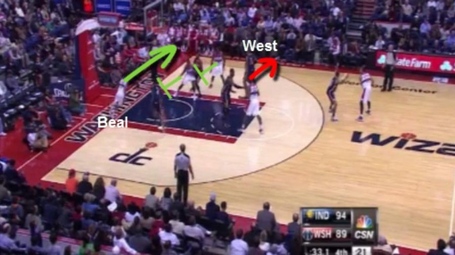 After the Beal option was shut down, Shaun Livingston looked to the other side of the court, where Jordan Crawford came off of a Kevin Seraphin screen. 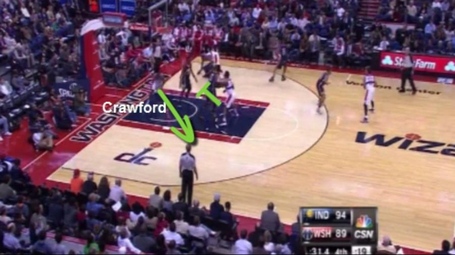 Here's where it's hard to decipher what the play call was. If the play is to maximize Crawford's chances of getting a (quick) shot, then Crawford made the wrong choice coming off of the screen. Based on how the defense was covering him he had a few options. He could have faded to the corner if Paul George tried to shoot the gap and go under the screen. He could have popped straight out to the three point line if George ran straight into the screen. Finally, since Paul George was following him around the screen, he could (should) have curled into the lane, away from the defender. 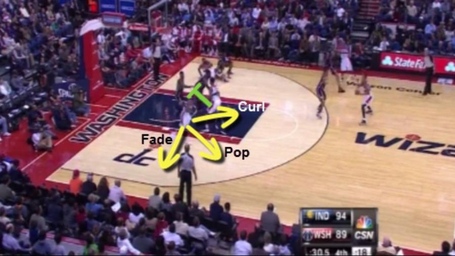 Crawford chooses to pop out to the three point line, which gives George an easy path to catch up. Considering the urgency with which Kevin Seraphin posts up, you could convince me that the play is actually being run for Seraphin. Crawford was simply popping out to make an entry pass, not looking for a shot. 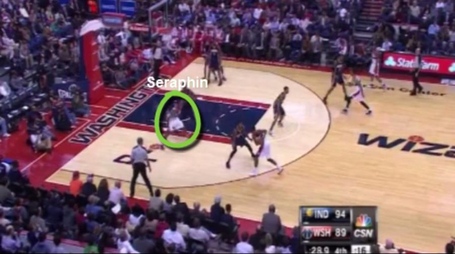 But we know how this possession ends. Crawford doesn't make the entry pass to Seraphin, and he instead settles for a contested 20-footer.

The Wizards get the worst of all worlds. Their first option is denied, they don't get a three-pointer, and the two-pointer they shot was a high-difficulty shot. If the play was for Crawford to get a shot, then he had the opportunity to curl the screen. And if the play was to get Seraphin the ball, then the long two-pointer is an especially questionable decision.