Wall in new ad: "What does it take to make it? I’ll let you know when I get there.”

There were skeptics out there when Reebok signed John Wall to a 5 year, $25 million deal before he was drafted in 2010. Much like the situation with his basketball team, Wall was being asked to be the face of Reebok from the get-go and help revitalize their brand. Obviously, things haven't quite worked out as planned so far for Wall with the Wizards or for Reebok, but in his new ad (which you can see above) Wall is trying to prove that he has the right pieces in place to get to where he wants to be. Wall's closing line, "What does it take to make it? I’ll let you know when I get there" will certainly open himself up to some quick Twitter jabs, but we like the confidence/swag he's showing in his ability to take the next step.

The other thing worth noting is the little message he writes on his shoe midway through the commercial. In case it moves to fast for you to read what he's saying, we got a screencap for you: 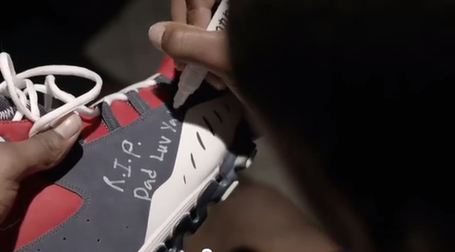 Right before he was drafted, the Washington Post came out with an article where they revealed to John Wall that his deceased father had spent time in prison for second-degree murder. As you can see, he's not letting that stop him from showing love to his late father.

The ad is a subtle, but defiant response to Wall's critics who have emerged over the past couple of years. Ultimately, the best way to silence his critics comes when he returns to the court, but this serves as a nice warning signal. Reebok has also released some other cool teaser videos to get people excited about Wall's upcoming year, once he returns from injury. By far, my favorite from the shoot has to be this one, where he stops an elevator in its tracks: