Against the Brooklyn Nets, the Washington Wizards used the flex offense to create opportunities for rookie sharpshooter Bradley Beal. While it is only preseason, the series of screens and cuts gave Beal and his teammates plenty of open looks at the basket. Let’s take a look at a few examples.

This play should look familiar to Maryland Terrapins fans, as the Wizards run a flex offense to create an opening for a shot. In this first play, we see Beal make the initial flex cut, using a screen from Martell Webster to come across the paint. 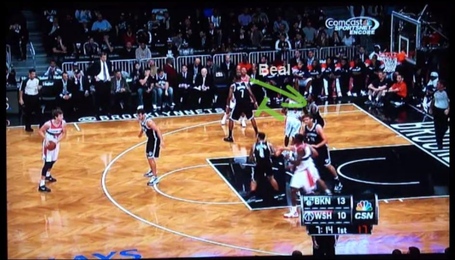 As Beal reaches the other side of the lane, he sets a screen for Jannero Pargo. From here, Pargo uses the screen to head back to the ball side. 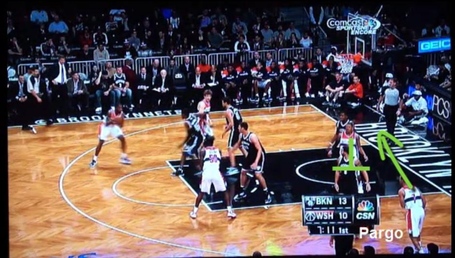 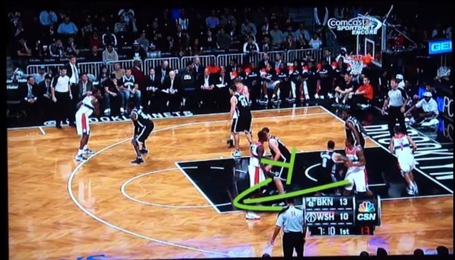 Williams gets wiped out by the screen, and Beal knocks down the wide open jumper. Video of the full play is below.

Later in the game, we see the exact same action run by the Wizards. Beal makes his flex cut across the baseline, and is ready to set the screen for Pargo. Deron Williams and Joe Johnson recognize the action and plan to switch assignments again. This time, Williams knows Okafor’s screen is coming after the Beal screen. But unlike the play above, Pargo cuts to the top of the key instead of going baseline. 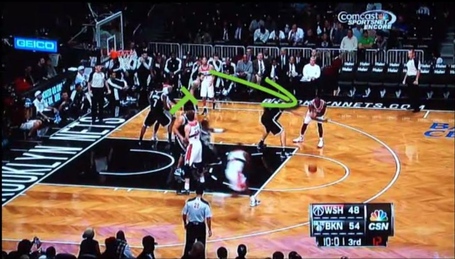 The screenshot below shows the Nets’ predicament. Pargo was supposed to cut baseline, right into Joe Johnson's waiting arms. Johnson is waiting for a cut that never comes, and Williams has left Pargo and is busy fronting Beal again. That means Pargo is wide open. 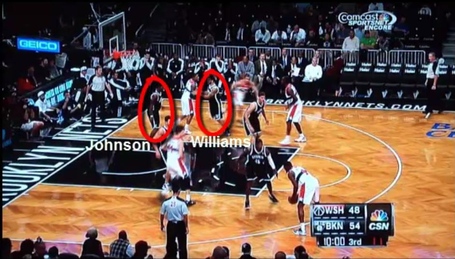 Unfortunately, Pargo misses the wide open jumper. Hopefully, that won’t be a recurring problem among Wizards guards. The full play is below.

If Bradley Beal becomes the shooter he is touted to be, his teammates can expect to benefit from the extra attention defenses give him. Deron Williams’ preoccupation with faceguarding Beal meant that he couldn’t maneuver around screens or help his teammates on the plays above. When (if) the Wizards get a full healthy roster, the team should be better equipped to take advantage of these defensive lapses.