Where does John Wall rank among recent number one draft picks?

The young Wizard is slowly becoming one of the NBA's best young point guards. Is that enough to justify his draft position, though?

Share All sharing options for: Where does John Wall rank among recent number one draft picks?

Winning the 2010 NBA lottery was dramatically changed the Washington Wizards. The pick guaranteed the franchise John Wall, a can't-miss prospect from the University of Kentucky with off-the-charts athleticism, elite court vision and excellent intangibles. The only knock on him was his poor outside shot, but scouts generally believed that it would either work itself out or Wall would be so good that it wouldn't matter that he can't score from outside the paint.

Two years later, Wall is still viewed as Washington's franchise player, but the honeymoon is either over or ending soon. While Wall has made decent progress as a floor general and defender, his jump shot is, if anything, worse than it had been when scouts were anointing him the league's next great point guard. Meanwhile, recent top picks Kyrie Irving and Blake Griffin have had an enormous amount of individual success, with Irving's Cavaliers looking like a playoff team and Griffin's Clippers hoping to contend for a title.

It's easy to get frustrated with John Wall. The lack of a jump shot hurts, as does the more immediate success of some of the NBA's other young players. Nonetheless, Wall is doing all right by historical standards: 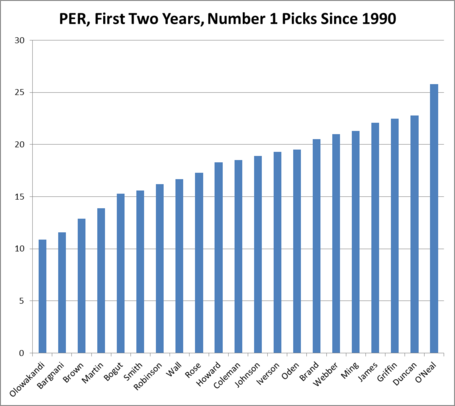 PER isn't a perfect statistic, but it can give you a general idea of how productive a player is. Wall's PER of 16.7 through his first two years is technically a little bit below average in comparison to other top picks, but considering that he's 1.) a guard (perimeter players tend to have slightly lower PERs than bigs due to playing further away from the basket), and 2.) younger than all but five other top picks, it's actually pretty good.

Wall's lack of team success should not be held against him, too. While a few of his fellow top picks led their teams to deep playoff runs relatively soon after debuting, the players who did this were generally part of very talented teams. For example, Rose joined a Chicago team that probably could have made the playoffs the year before if it hadn't been hit by injuries. It's not good that Wall still hasn't played into May, but that has more to do with the talent level of his teammates than any failing on his part.

Even in comparison to Irving and Griffin, two number one picks who had more immediate NBA success than him, Wall is pretty good. Irving and Griffin are both poor defensive players, with Irving in particular not having a lot of upside as a defender. Wall, on the other hand, has already shown signs of being one of the NBA's better defensive point guards and has a very good shot at growing into the best due to his length and quickness.

John Wall is no Lebron, Shaq or Duncan. He's not going to lead Washington to a title on his own, at least not any time soon. The truly transcendent players like that are the exception, not the rule, though, and Wall's well on his way to having a career typical of a top pick.