The Minnesota Timberwolves, led by McDreamy, Kevin Love and Serbian Gangster, come into town looking for their first win in Washington D.C. since December of 2003. Let's meet them.

Are they good in general?: Despite all the good feeling up there, no. They're 2-4, and that includes home losses to an injury-depleted Memphis team and the Cavaliers.

Are they good against the Wizards? This version of the Timberwolves has not played the Wizards yet.

Are they fast or slow? The Wizards are finally playing a true fast-paced team! The Timberwolves are fourth in the league in pace under new coach Rick Adelman, and that's actually a step down from where they were the last couple years (first last year, third in 2009/10). Before, they ran like crazy without any rhyme or reason. Under Adelman, they're running a lot more efficiently.

Are they especially good at anything? Minnesota is an outstanding rebounding team, ranking in the top six in both offensive rebounding rate and defensive rebounding rate. Kevin Love is the primary man to thank for this, as he's off to another fantastic start on the glass, but there are others. As a team, they really do a nice job.

Are they especially bad at anything? The Timberwolves are a young team, and this shows up in two major areas. First, they are the worst team in the league at taking care of the ball. While Ricky Rubio has been fantastic thus far, he also has an obscenely-high 28 percent turnover ratio (meaning, 28 percent of Minnesota's possessions end with a Rubio turnover when he's on the floor). Second, their fourth-quarter execution leaves a lot to be desired. The Timberwolves have been in every game they've lost, but haven't been able to finish the job because they aren't able to properly run their sets late. If the Wizards are able to keep this game close, we might see a lot of ugly possessions from both teams down the stretch.

Are there any people involved with the organization that Mike really likes? Kevin Love, Kevin Love and more Kevin Love. If there's still anyone who objects to Love being one of the NBA's best young stars, it's based off typecasting his game in such a way that really isn't true anymore. I'm really, really, really scared at the prospect of Andray Blatche trying to prevent his open looks from three-point range and keeping him off the glass.

Are there any people involved with the organization that Mike really doesn't like? I get the idea of Wesley Johnson, but he just never shows me anything. He's just a guy, kind of like Marvin Williams. There's nothing I hate more in a player than someone who doesn't have an elite skill they can bring to the table.

Are there any players poised for a breakout? Derrick Williams will start at small forward for the injured Michael Beasley, which will give him a chance to showcase his game. From watching him, you can see the effort and tenacity is there. He's just struggled a bit to finish because I don't think he's in good enough shape quite yet. You see this a lot: a rookie comes in thinking he can maintain his condition in college, only to find the NBA is a different game. Most of these players get that and transform their body. I think Williams will too in time.

Are there any players the Wizards especially need to worry about? The Wizards need to stick with Love when he pops out for open threes. It sounds easy, but it's not. Let Rubio and Luke Ridnour beat you with 19-footers. Just don't give Love an inch. Also, this needs to be a gang rebounding game. Both Blatche and JaVale McGee need to play well above themselves on the inside.

Is their mascot cool? It's a wolf named Crunch, and it's apparently a carnivore. 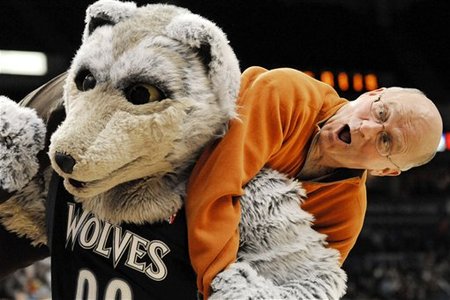