The Chicago Bulls have the best record in the East, but at least Derrick Rose occasionally misses clutch free throws. There's hope!

Are they good in general?: According to the first 10 words in this post, they are.

Are they good against the Wizards? They topped them, 78-64, in an ugly game without Rose on January 11. Very little that happened in that game is instructive.

Are they fast or slow? This is a grind-it-out team that relies on Rose and half-court execution to win. They're 23rd in the league in pace and have a variety of interesting half-court sets to try to mask the fact that they don't have a ton of offensive options outside of Rose.

Are they especially good at anything? Obviously, they're among the league's top defensive teams, but this year, they're also third in offensive efficiency. They've played an easy schedule, but that speaks to the underrated strength of Thibodeu. More specifically, this is the best rebounding team in the league. They are No. 1 in offensive rebounding and No. 1 in biggest difference between their offensive rebound percentage and their opponents'. They also have outstanding depth, which has allowed them to survive injuries to Luol Deng and Rip Hamilton, both of whom probably won't play tonight.

Are there any people involved with the organization that Mike really likes? Always loved Taj Gibson and Omer Asik. Two frontcourt reserves that are a terror defensively and won't screw you up offensively. They've finished lots of games instead of Carlos Boozer and Joakim Noah this season.

Are there any people involved with the organization that Mike really doesn't like? Remember when Boozer was good?

Are there any players poised for a breakout? This being the Bulls, probably not. The closest thing is probably Gibson.

Are there any players the Wizards especially need to worry about? Walling off Rose will be key, pun intended. John Wall needs help from his bigs if he has any chance of slowing Rose down. Defensive communication is going to be very important due to all of Chicago's offensive misdirection. Nobody can fall asleep off the ball against this team. Also, the Wizards need to rebound. The Bulls are great at rebounding because they crash the glass. If the Wizards can manage to secure the ball, they will get transition opportunities. The Bulls will be tired after Sunday's emotional loss to Miami, and their transition defense wasn't very good in that game.

Is their mascot cool? Benny The Bull has been there forever. 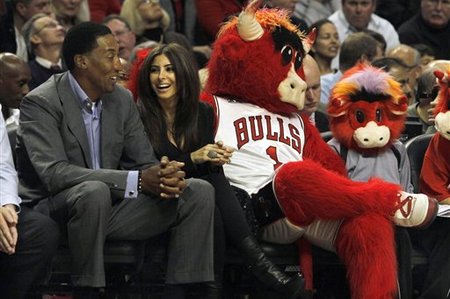