Editor's Note: This was done a while ago, but never showed up on front for some reason.

Are they good in general?: The Nuggets have won 66 percent of their games so far this year, and they were one of the best teams in the NBA after the trade deadline last year. They're very good.

Are they fast or slow? Blazing fast. Earlier this week, Flip Saunders called them the best fast-break team in the NBA, and the numbers bear this out. No team plays at a faster pace.

Are they especially good at anything? I love watching the Nuggets play because there are no wasted motions. Everything they do is immediate. In the past, they'd all stand around and watch Carmelo Anthony try to make a play. With him gone, George Karl's vision has been realized. The players catch and immediately go, whether it's a shot, a drive to the basket (most often) or a pass. This is why they are by far the NBA leader in free-throw rate. They attack so quickly that teams often have no choice but to foul.

Are they especially bad at anything? Their fast style causes them to get sloppy at times, allowing the other team to get out in transition. The Nuggets are 25th in the league in turnover rate and aren't all that great at shot defense either, because teams can get so many easy shots. This could benefit the Wizards, who like to run, but are easily unable to against disciplined teams.

Are there any people involved with the organization that Mike really likes? Ty Lawson is fantastic and will be a major, major test for John Wall. The same goes for Andre Miller, who remains crafty even at his advanced age. It's going to be really hard to contain them when they are playing together.

Are there any people involved with the organization that Mike really doesn't like? I still think Danilo Gallinari shoots too many long shots for my liking. He's capable of being a great player, but too often settles for long shots.

Are there any players poised for a breakout? Lawson and Gallinari are obvious candidates, and Al Harrington is randomly having a good year off the bench.

Are there any players the Wizards especially need to worry about? With Nene injured, the Nuggets probably won't be able to push around the Wizards inside. However, as mentioned before, Denver is going to be really tough when they play Lawson and Miller together. Denver's top three lineups all have Lawson and Miller in them together, and against a team that struggles with pick and roll defense, it's especially devastating.

Is their mascot cool? Rocky's pretty solid as long as he's not Tebowing. 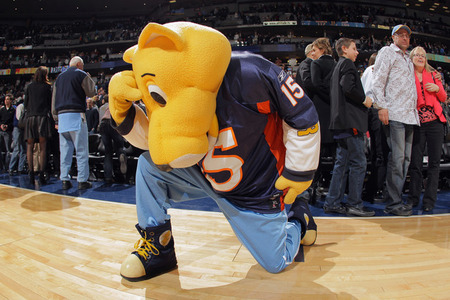 Any other random quirks? It's another homecoming, this time for Lawson. Something tells me this won't get as much attention as Durant or Anthony.