I know the Wizards played the Celtics yesterday, but with Sean and I traveling, we didn't have a chance to do one of these, so we're going to make up for it with one today. Also, this can double as the non-DeMarcus Cousins thread. Here's more on the Celtics.

Are they good in general?: They won 56 games last year, so yes, they were good, even after the midseason trade of Kendrick Perkins. This year, they lost their first three games with Paul Pierce sitting, then won their next two games with him back in the lineup. They're definitely good.

Are they good against the Wizards? They just beat them pretty easily.

Are they fast or slow? As long as they have Rondo, you always have to worry about the fast break. He's that good at it. To best take advantage of his skills, the Celtics really push the secondary break as well, so the Wizards need to match up if they want to stop him. On the whole, though, the Celtics are a slow-paced team, not rushing their offense in the halfcourt. They're 27th in the league in possessions per game this year, and they were 24th last year.

Are they especially good at anything? Their vaunted defense has fallen off this year, so we'll go with their passing. Only Toronto has a higher team assist rate than Boston this year, and nobody was better last year. Part of that is Rondo, but most of it is due to the team's unselfish superstars. If anything, the Celtics overpass sometimes, which costs them against good teams. Against teams like the Wizards, though, the ball movement is mesmerizing to watch, as we all saw on Sunday.

Are they especially bad at anything? The Celtics' Achilles heel even during their heyday was turnovers. Rondo is great, but his style naturally leads to a lot of coughing up the ball. The overpassing also leads to a lot of dead-ball turnover from three-second and shot-clock violations, and they still set plenty of illegal screens. It seems like a weird thing for this kind of team to do poorly, but it's a reality.

Are there any people involved with the organization that Mike really likes? Outside of their top guns, I've always been a Keyon Dooling fan, for what he is. For a third guard, you could do much worse.

Are there any people involved with the organization that Mike really doesn't like? Does anyone who isn't a Celtics fan like Kevin Garnett?

Are there any players poised for a breakout? Not really, given the age of this team.

Are there any players the Wizards especially need to worry about? I guess I'll use this space to talk about the need to give Rondo different looks. The Wizards' default pick and roll defense strategy was to have John Wall fight over the screen and have the big man help him. That makes sense against most players (execution is real issue), but with Wall's length and Rondo's inconsistent jump shot, I'd like to see the Wizards occasionally go under the screen. This has its disadvantages too -- Rondo can now see the whole floor -- but I think it's worth doing every so often.

Is their mascot cool? Here's "Lucky The Leprichaun," who is kind of lame. 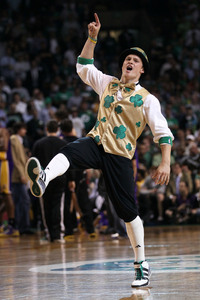 Any other random quirks? Brandon Bass never passes. I dunno.