I'm back in the saddle after a weekend of running around a bit, and I'm ready to get back to it. Without further ado, let's meet the Washington Wizards' Martin Luther King Jr. Day opponent: the Houston Rockets.

Are they good in general?: Mediocre is probably the best way to describe them. A tough early schedule doomed them to a bad start, but they just picked up a home win over a very good Portland squad in overtime.

Are they good against the Wizards? They have not played the Wizards this season. Last year, the Wizards beat them in D.C. in what proved to be the final game of Yao Ming's career, then lost to them in Houston in December.

Are they fast or slow? The Rockets currently average 93.1 possessions per game, which is 20th in the league, but to the naked eye, they like to push the pace. Not sure why their numbers are so low, but maybe I'm missing something.

Are they especially good at anything? Watch those shooters. The Rockets spread the floor beautifully, and you always need to watch for them launching away from deep. Kyle Lowry is shooting nearly 42 percent from three, and while Chase Budinger and Kevin Martin have struggled at times this year, they're both really dangerous.

Are they especially bad at anything? This isn't a big team, but it hasn't killed them on the boards as much as I would have expected. Instead, we'll focus on how they never get to the free-throw line. Houston is dead last in the league in free throws attempted per 100 shot attempts, way below anyone else. Martin's struggles are most mysterious here. Last year, Martin averaged 8.4 free-throw attempts per game. This year, despite playing three more minutes per game, he's only averaging 4.2. Very strange.

Are there any people involved with the organization that Mike really likes? I wrote this piece on Lowry because Lowry is awesome.

Are there any people involved with the organization that Mike really doesn't like? Houston's big men are really bad. Samuel Dalembert is just good enough to make you think he's better than he is, and Jordan Hill has been pretty much as mediocre as I figured he'd be coming out of college.

Are there any players poised for a breakout? Lowry's in the middle of one.

Are there any players the Wizards especially need to worry about? Luis Scola is the anti-JaVale McGee, and whether he plays at center or power forward, he's a tough matchup. It's hard to prepare for Scola because you have to unlearn so many defensive tendencies with him. You'll stay down on a pump fake and seemingly lock him down, only to see him exploit some angle with some weird-looking shot that nobody else would even bother trying. I'd expect the Rockets to try to go small and put Scola at center to get McGee off the floor. Without Ronny Turiaf there as insurance, how will Flip Saunders respond?

Is their mascot cool? I'm a fan of "Clutch" myself. 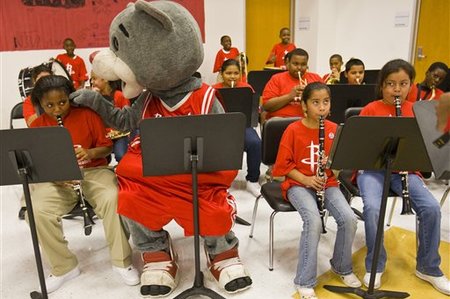 Any other random quirks? As I noted on SB Nation D.C., the Wizards are 7-2 in their last nine games on Martin Luther King Jr. Day, and they've beaten some good teams over the years. It'd be nice to see that streak be continued.