Retro-Diary: Bullets-Magic And The Time Jim Lynam Let Shaq Run All Over His Team

Share All sharing options for: Retro-Diary: Bullets-Magic And The Time Jim Lynam Let Shaq Run All Over His Team

I've been doing retro-diaries for SBNation.com while the lockout is going on, in a series that will continue for a very long time.  These games come from a variety of sources (YouTube, my DVDs, etc), and they've been fun to do.

Our first offering comes from March of 1996.  The 1995/96 Bullets were the team that first really got me interested in the NBA.  They dealt with a rash of injuries, with Chris Webber playing only 15 games, shiny new toy Mark Price down for the year and emerging point guard Robert Pack followed him after 31 games.  Guys like Brent Price, Jim McIlvane and Ledell Eackles played big roles.  CBA point guard Chris Whitney came up and never left.  And yet, despite all this, the Bullets finished 39-43 and were close to being a playoff team.  They were a great underdog story, and just wait until everyone got healthy.

On this night, their playoff hopes were slipping away, and a date with the powerful Orlando Magic awaited.  What resulted was a memorable game that ultimately summed up the Bullets' season.  They were undermanned, they fought hard, they looked like they were going to win, but ultimately didn't have enough.  Warning: you may want to fight Jim Lynam after this is over.

We're live from the broken-down USAir Arena.  Mel Proctor and Phil Chenier are on the call for HTS, with a much younger Al Koken manning the sidelines.  How much younger?  Observe. 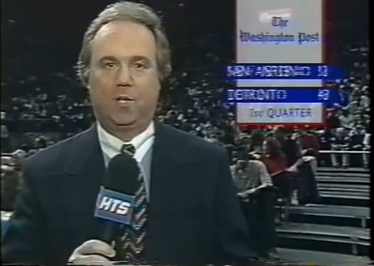 The crowd is buzzing because Mike Tyson and his "entourage," as Proctor describes, has shown up.  A couple other notable developments:

(Note: timestamps refer to those on the video, since the scoreboard doesn't flash on the screen much).

5:46: Shaq gets into the lane and Muresan fouls him as the four other players watch like they are glued to their men. This will become a theme, and you will not like it.  Gheorghe's mood: confused. 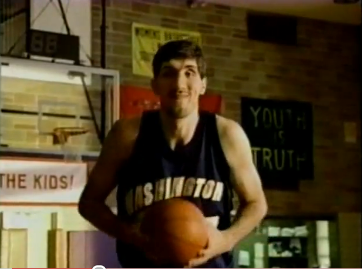 7:40: OK, I'll say it: Orlando's offense, which is basically just four guys standing around as either Hardaway or Shaq post up, is everything wrong with the NBA in 1996.

10:18: If I was a fan of another team, I'd get mad whenever Howard would stand there and try a series of fakes that go nowhere.  Worked this time, though.  7-6, Orlando.

12:15: Mel talks about how Robert Pack is close to practicing again, though as we now know, he ended up not coming back.  I'm convinced that Pack's injury was the real dagger that slowed the Bullets' rise.  If he doesn't go down, the Bullets could have just re-signed him instead of trading Wallace for Strickland.  People forget: Pack averaged 18 and 8 with a PER of 19.3 at age 26, though he did use a lot of possessions and was a bit turnover-prone.  Seeing him wearing this game after game was depressing. 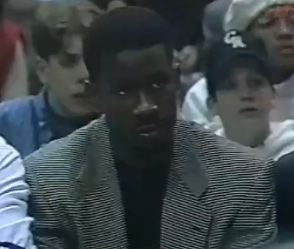 13:55: Given how good Penny and Shaq were at the two-man game, it's a wonder Brian Hill didn't run it more often.  Wait, nevermind, he's Brian Hill. 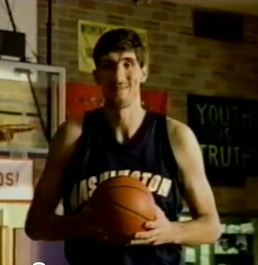 17:17: Bowie runs into the Great Wall of Gheorghe, shoots a point-blank layup five feet long, then falls down to try to get a call.  Nine-year old me laughs at him before my dad tells me to stop being mean.

17:30: Wallace is stripped by Jon Koncak, and immediately runs over to the sidelines shouting "S**T, GODDAM."  It's because his finger hurt, not because he missed a layup.  He comes back in, but later departs with a fractured finger.  It sidelines him for the rest of the season.  This means that you're now watching Wallace's final game as a member of the Bullets.

21:00: Jim McIlvane was a fun player to root for, but if you're seven feet and you won't shoot a point-blank layup off a rebound, you're basically six feet.  Or, Boris Diaw.  Or, higher-paid than Shawn Kemp.

22:15: Grant misses two long jumpers, dropping his percentage on those shots down exponentially, and the quarter ends with Orlando up 1.

22:45: Guess we know now that Jim McIlvane is getting just as little help guarding Shaq as Gheorghe got.

25:00: Mel explains my irrational hatred for Bowie by reminding us of the time a few weeks prior when Bowie, needing one assist for a triple-double against the Pistons, called timeout with just seconds remaining to give himself a chance to get it.  Doug Collins was enraged and pulled his team off the court, so Bowie got his assist.  Remember this next time you bash Andray Blatche or JaVale Mcgee for going for meaningless triple doubles.  Chenier: "The whole idea is to do it in the process of getting a win."

Here's video of that, by the way.

25:46: Chris Whitney checks in for the first time.  A few hours later, he will leave having the game of his life.

26:40: "I got it!  The key to stopping the Magic is letting Shaq back in on Gheorghe and dunk on him without helping!  He'll get tired eventually, right!?" #jimlynamthoughts

28:15: Penny and Shaq run another pick and roll that results in Shaq taking Gheorghe's head off on an alley-oop.  The good news is the dunk missed and the ball went out to half court. Someone please save Gheorghe before it's too late.  Gheorghe's mood: scared. 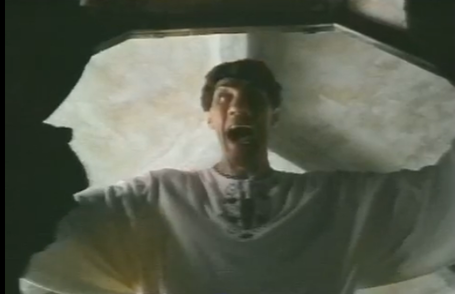 31:53: Tim Legler, who I will refer to as "1996 J.J. Redick" throughout this series, just drove in, flopped around and drew a foul.  Basically, he drove, saw three Magic defenders, leaned his head forward and fell to the floor.  It worked.  Here's him sighing in relief. 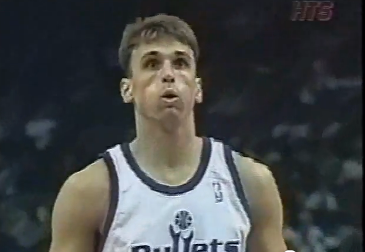 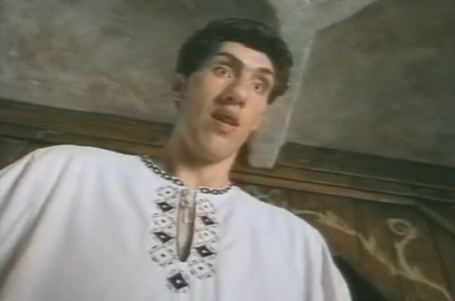 37:35: Shaq misses another jam, but is bailed out by a ticky-tack foul on Gheorghe, his third. Gheorghe's mood: angry. 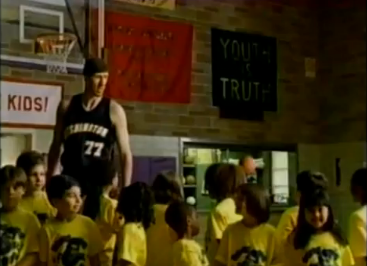 40:05: Rasheed with a JaVale-like wraparound that goes out of bounds.  He's still grimacing about that finger injury.  Naturally, Jim Lynam's response was to keep him in. 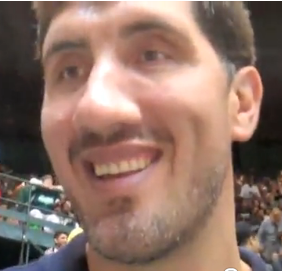 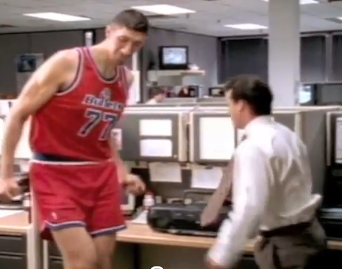 49:30: Shaq gets away with a hook and finally gets his revenge.  Phil, with some solid words of wisdom: "I think that when he's bouncing the ball that much, you have to send someone to help [Gheorghe]."  Jim Lynam's response?  "LALALALALA I CAN'T HEAR YOU."

50:30: Rasheed goes out and goes straight to the locker room, never to return as a Bullet.  Al Koken reports that he fractured his finger.  The long tradition of Washington players reaggravating injuries while needlessly playing through them begins.

52:20: Penny hangs in the air and scores while drawing the fourth foul on Muresan.  Gheorghe is not happy, either because at the foul call or at Eackles for letting Penny go baseline.  Gheorghe's mood: exacerbated. 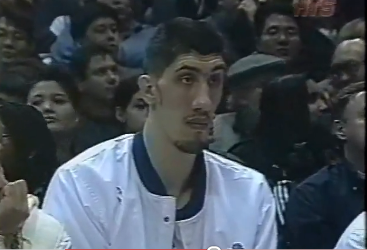 54:48: Here's your murderers row of injured players Rasheed will soon be joining. 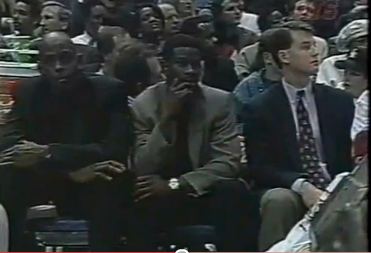 1:00:30: Shaq checks back in and dunks it on a rebound on McIlvane.  Here's where the loss of Rasheed stings, because Rasheed played some center in small lineups, and it would have at least given Shaq a different look.  This all assumes Lynam actually would have tried something different.

1:02:39: Penny hits another fadeaway, and Orlando has a five-point lead.  The Bullets were victimized earlier by that stupid move that allows teams to call timeout as a player is falling out of bounds, and it's still making me mad.  Someone should probably remind me that rule doesn't exist anymore.

1:04:42: Six straight points from the Bullets erases that lead quickly.  Cheaney punctuates the run with a toe-on-the-line two, which helps explain why nine-year old me irrationally disliked him.  I have no idea why, but I never liked Cheaney growing up.  I still don't really like him now, but at least I can admit my nine-year-old self was a hater.

1:08:35: "So Gheorghe has four fouls with 12 minutes to go, and Shaq is killing us.  I KNOW.  Let's single-cover Shaq and make it so Gheorghe will have to pick up his fifth foul.  Brilliant!" -Jim Lynam

1:12:29: Bowie blows a wide open layup.  I think this is what Doug Collins was thinking. 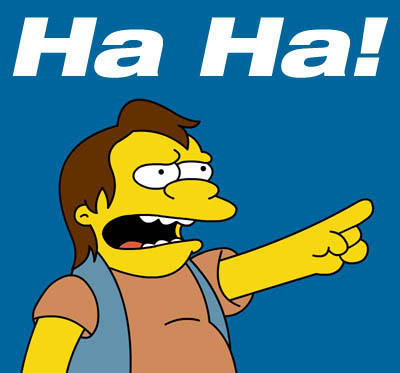 1:17:00: Whitney strips Penny, but Penny recovers in midair to score and tie the game.  Guess it's not the Bullets' night.

1:18:44: Shocker: McIlvane fumbles another defensive rebound away. That's enough for Lynam to get Gheorghe back into the game with five fouls and six minutes. If you thought now was the time where Lynam would start to double Shaq, you're wrong, obviously. Shaq grabs a rebound and scores, and Orlando leads by two. 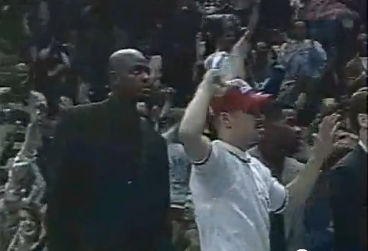 1:23:17: Gheorghe turning and shooting over a smaller player is ugly for most, but a thing of beauty for a Bullets fan. UNSTOPPABLE BABY. Bullets by six, which is somehow the largest lead of the game for either team.

1:24:01: Kazam was evidence enough that Shaq can't act, but in case you needed more, that flop attempt to try to draw Gheorghe's sixth foul should do the trick.

1:24:33: Shaq waltzes into the lane and scores as nobody provides help.

1:26:50: Shaq waltzes into the lane and scores as nobody provides help.

1:28:28: Shaq waltzes into the lane and scores gets fouled as nobody provides help. Tie game.

1:29:24: Cheaney has his shot blocked by Shaq, who recovers and does the stupid "call timeout while falling out of bounds" thing. The block/foul decision is a tough one -- today, it'd be a foul, but in 1996, it's borderline. The timeout thing enrages me to this day.

1:31:45: Good to know the "no-help" policy extends to Penny as well. Magic by two. Thankfully, Howard is the beneficiary of a make-up call from a previous dubious offensive foul, and he hits two free throws.

1:33:00: Dennis Scott misses a wiiiiidddee open three that made me want to do really bad things to Cheaney. We're going into OT, improbably. I admire Al Koken for keeping it clean when reporting that Lynam told his team not to leave Scott open. That must have been tough to do.

1:37:22: Shaq waltzes into the lane and scores as nobody provides help.

1:38:15: Penny waltzes into the lane and scores as nobody provides help. 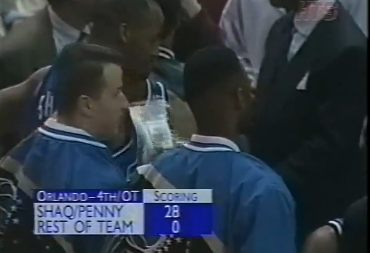 1:40:20: Gheorghe knocks Whitney down and tips in a rebound, all in a days work. Tie game again. Gheorghe's mood: apologetic. 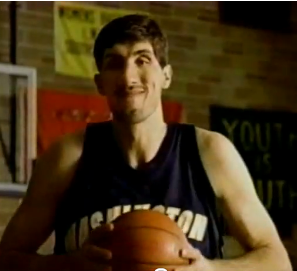 1:42:55: Down two, the Bullets finally run a play for Juwan, and he misses a bank shot. Say what you want about Juwan's Bullets career, but on this night and with this team, he was the man for them. He needed more shots than he got in OT, especially with Whitney, 1996 J.J. Redick and Gheorghe out there with him.

1:43:18: Penny being too good again. Magic by four, under 35 seconds to go. This one might be over. But don't worry, because there's a game against Denver on Sunday! 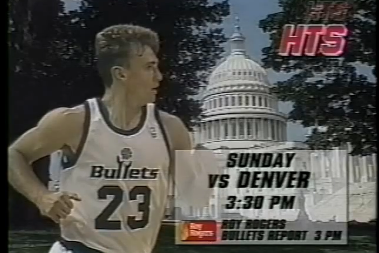 1:45:51: Needing a quick score, the Bullets instead dribble around for a while and turn it over with 13 seconds left. This one's over.

1:47:55: Hold the phone - Whitney hits an impossible three, and it's down to two with 4.2 seconds left with Brian Shaw going to the line. He hits just one of two. So you're saying there's a chance?? 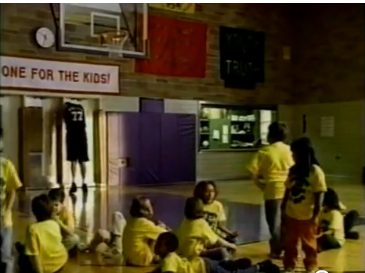 That loss pretty much killed the Bullets' playoff hopes, (UPDATE: I had forgotten about that seven-game winning streak at the end of the year. My bad, folks), but they had proven enough that season in being close to .500 despite a rash of injuries. The question going forward was whether that promise would yield anything significant going forward. Sadly, we know the answer to that question.

Hope y'all enjoyed this.