There was a line in Michael Lee's season-ending blog post on Jordan Crawford that caught my eye and is worth further examination.  The whole thing is worth reading, as it discusses how Crawford felt he needed to get out of Atlanta to make it as a pro.  But there was also this line by Dwyane Wade.

But after Crawford's high-scoring performance against the Heat, Dwyane Wade offered up a backhanded complement of sorts, when he gave Crawford "some credit" while noting that he got to take "free shots."

"He shot the ball well," Wade said. "He's a scorer, he played with a lot of heart, he's a tough kid, but it's a little bit different when you're playing for something than when you're not."

Wade becomes the second person to publicly write off Crawford's accomplishments as just coming because he had a constant green light.  Former coach Larry Drew said similar things when the Hawks rolled into Washington at the end of the season.  They have a minor point, though it's conveyed in such a dismissive way that it's hard to take them seriously.  Jordan Crawford's shot selection probably does have to improve a bit.

But I was more curious as to just how, exactly, it should.  So, I decided to compare Crawford' shot attempts to four other smallish combo-guard scorer-types that have carved a nice niche in the league as sixth-men types this season: Jason Terry, Jamal Crawford, Marcus Thornton and Lou Williams.  (And lest you think these are subjective, they sort of are.  Three came on a Basketball-Reference search, and I added Jamal Crawford in there for the Atlanta connection).  What percentage of their total shot attempts came from each spot on the floor?  Answers below the jump. 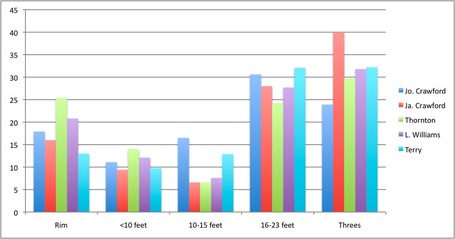 A couple things from this chart:

This is not too much to ask of Crawford.  A few more layups, a few more threes instead of off-the-dribble long twos, and he's right on line to be a good small combo guard scorer like these players.  Wade and Drew might be right, but let's not act like the transition they speak of is an impossible thing to do.
(Thanks to HoopData for the shot location figures).