The Wizards were calling plays for JaVale McGee

Share All sharing options for: The Wizards were calling plays for JaVale McGee

The Internet is ablaze at JaVale McGee blatantly trying to go for his triple double at the end of a Wizards blowout loss to the Chicago Bulls.  NBATV analyst Kevin McHale, a smart guy, eviscerated McGee last night, saying "I am not impressed" and "That was terrible."  Chris Webber chipped in, saying "Act like you lost by more than 20."

But any analysis of this display has to consider the fact that the Wizards specifically ran three plays for McGee to get his triple double down the stretch.  In other words, they set him up to fail.

Here's the first play.  The Wizards let McGee catch the ball at the top of the key and let him go off the dribble, which is exactly where they don't want McGee to be, ever. 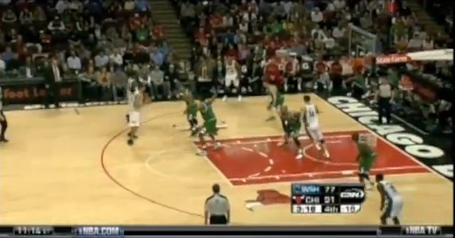 This feels like the Wizards initiating a set with JaVale as the ball rotator, but nobody moves to go get the ball.  John Wall isn't even looking at McGee on this play.  Both players in the corner stay in the corner, standing there as JaVale went to work.  We can only conclude that the other players planned to give JaVale space to go to work. 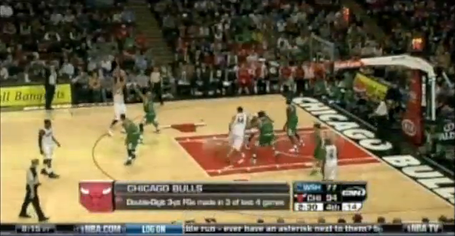 Yi is holding the ball on the left side, specifically waiting for McGee to get across the lane.  He's not in a triple-threat position, and there is no action on the weakside.  The Wizards very clearly ran this play with only one option: get JaVale the ball.

Finally, the last play is a little bit of a grey area.  The Wizards ran the same play, but Kurt Thomas cut it off and pushed McGee out further than he wanted.  Wall paused for a second, as if he expected McGee to come set a screen, but he didn't.  Then, Wall did what he should not have done.  He passed the ball to McGee. 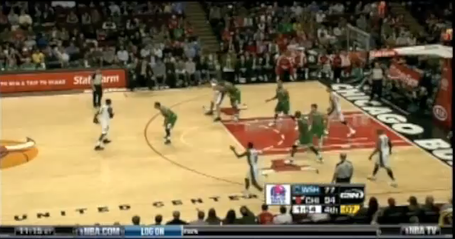 Jordan Crawford knows what's up here and calls for the ball to eventually run a side pick and roll, but Wall ignores him and gives the ball to McGee at the elbow.  If the game was close, would that be the right decision?  Of course not.  The fact that Wall made it is troubling.

None of this is to defend McGee necessarily, but it's a far bigger concern to me that the team enabled him by running plays for him like they did.  If the Wizards really want to preach to McGee the importance of being a winning player, they should have taken him out, or at the very least, told him that he needs to get his final point on a putback.  In the end, that's what he did, but it took far too long.  I'm not sure whether Flip Saunders called the plays himself or the Wizards ignored him and ran different plays, but neither is a good scenario.

If the Wizards are to make this rebuild work, these opportunities to start building a good culture need to be capitalized instead of being squandered like this.