John Wall dished out a Rookie Challenge record 22 assists in leading the Rookies to a 148-140 win over the Sophomores. DeMarcus Cousins had a legit claim to MVP, but Jimmy's 22 assists were just too much, which included a bounce-pass alley-oop to Blake Griffin. Yeah, you read that correctly (the highlight of the game). I thought Wall and Cousins would share MVP, but no gripes with our man taking it all for himself. Cousins was good, but didn't generate the excitement in the game that his stats indicate, and Wall obliterated Chris Paul's record of 17 assists. Whatever, at least the Wizards won something this year.

My favorite part of the game, other than the bounce-pass alley-oop, was the final play of Wall getting an off the backboard alley-oop from Cousins. That sounds amazing enough, but it is very possible that Jimmy did the Dougie while hanging on the rim: 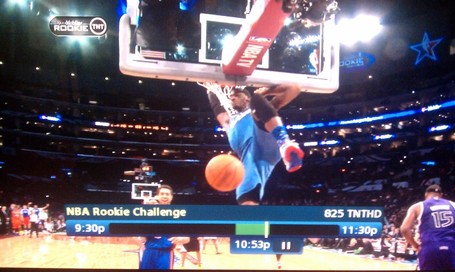 My DVR couldn't stop a split second before this shot for some reason, so this is not the best shot. That said, Jimmy's hand definitely went behind the head, a little Prime Time Deion Sanders, but more likely a Dougie move.

For anyone who watched the dunk, I'd like to hear thoughts on whether Wall was trying to do the Dougie here. He was definitely trying to do something as he swung side to side......