Share All sharing options for: John Wall's Struggles In The Half-Court And Why I'm Confident They'll Be Fixed

Sebastian Pruiti, who breaks down game tape better than any non-NBA employee I've ever read, has a great post on Grantland today on what John Wall must improve on to get to the next level. Pruiti looks at Wall's underwhelming performance in a couple half-court areas offensively and notes what Wall must do to be better at both next season. Those two areas are as follows:

Both seem like relatively easy fixes to me, which is why I'm excited.

For the latter, improvement is going to naturally come with experience. I've noted several times that Wall ran far less pick and roll in college than many of his predecessors under John Calipari. As Pruiti writes:

Wall didn't run the pick and roll much at Kentucky, where he came off of ball screens on only 9.7 percent of his possessions. With the Wizards that number more than tripled, to 30.1 percent, so it should be no surprise that Wall experienced some growing pains in his rookie season.

That's a monumental jump (nickname placement, you're welcome Ted!) from one year to the next. Eventually, Wall will gain more experience and improve.

The jump-shooting thing is more interesting. On the one hand, there is a degree of concern in having Wall focus so heavily on making that part of his game better. That's been drilled home to him by coach Flip Saunders and assistant Sam Cassell, and Wall spent the better part of the end of last season and this summer improving that shot. You would hate for him to go too far away from what he's good at in the name of proving to people he can hit the 17-footer.

At the same time, though, we have to consider Wall's lack of health. As he told Chris Miller earlier this week: 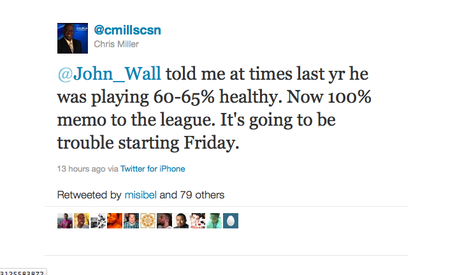 I never heard a number that low last season, but Wall definitely was hurting. As he told me in January:

"It's just kind of tough for me because of the injuries," Wall admitted to me after the game. "That's the only thing really I think that's stopped me from being who I want to be and controlling myself."

"Who I want to be" for John Wall, I'd think, is a guy that attacks the rim and gets points in the paint. With him being so hurt, it became easy for him to settle for jumpers. There's a physical element, of course, but there's also a mental element that worries about getting hurt again. If Wall is healthy again, you'd think that element can easily be overcome.

That's the hope, at least. But I think it's a fairly legitimate hope.